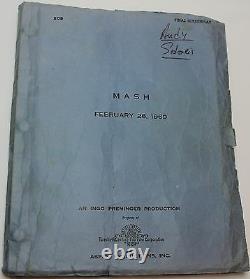 It has the original studio. Cover, which is in fair condition.

Furthermore, the pages inside are all in very good condition. This is an awesome Original Movie Script. The personnel at the 4077 MASH unit deal with the horrors of the Korean War and the stresses faced in surgery by whatever means. The tone at the MASH is established by recent arrivals, surgeons Captains'Hawkeye' Pierce,'Duke' Forrest, and'Trapper' John McIntyre - the latter who Hawkeye knows he's met somewhere, but Trapper who won't divulge where - whose antics can be best described as non-regulation, and in the negative words of one of their fellow MASH-ers: unmilitary. The unit's commanding officer, Colonel Henry Blake, doesn't care about this behavior as long as it doesn't affect him, and as long as they do their job and do it well, which they do.

Their behavior does extremely bother fellow surgeon, Major Frank Burns, and recently arrived head nurse, Major Margaret Houlihan, who obtains the nickname'Hot Lips' based on information they glean about her through underhanded means. Beyond their battles with Frank and Hot Lips, Hawkeye, Duke and/or Trapper help unit dentist Painless.. POSTER IS NOT INCLUDED, IT IS JUST BEING USED AS A VISUAL REFERENCE.

A lot of people, new to collecting, are confused about the word Original. " In terms of movie scripts, the term "Original means that it was used by the production company in the early stages of production or that it was issued out to the cast and crew members during filming, and used at the time of production. Any scripts printed or used in any fashion after filming has completed are known as either a reproduction or a post-production script. These two types of scripts are much less valuable and desirable. All of our scripts are Original. An original movie script has a lot of character in the item itself and every one of them is different in some way or another. There is usually only one script given to each crew member during production, however, sometimes they do get more than one.

Whatever actor, producer, director, writer or specific film department you are looking for, we probably have a movie script related to the person you are looking for in some form or fashion. I know that there are a lot of items to search through, but there is definitely something for you. Once you check off this little box it will allow you to search for a specific word that is contained in any of our listings' actual description. Here all of the original movie scripts will be categorized by decade, which will help you to narrow down what you are looking for by the year it was made. The item "MASH / Ring Lardner Jr.