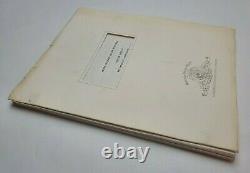 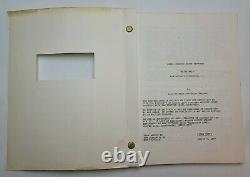 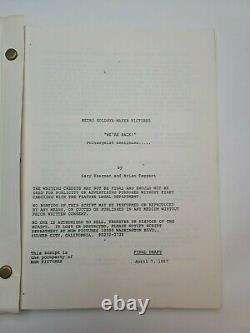 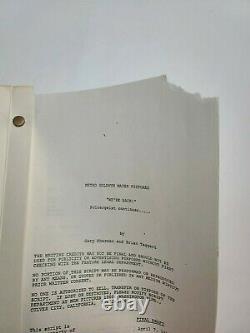 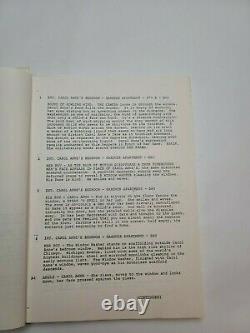 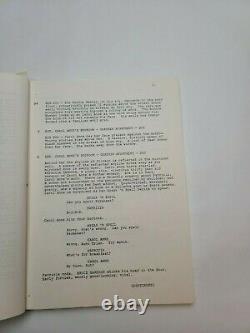 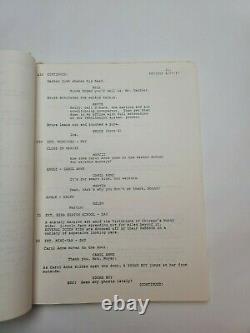 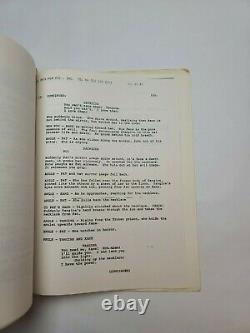 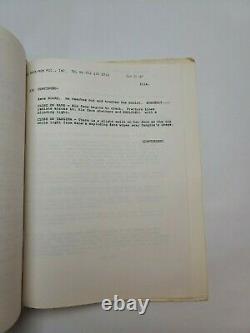 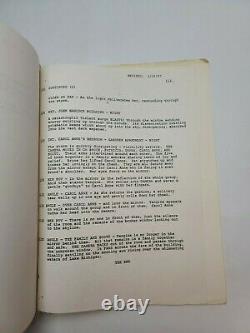 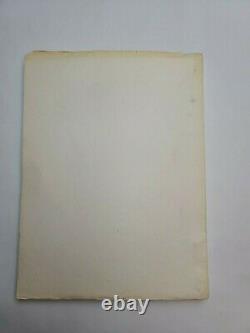 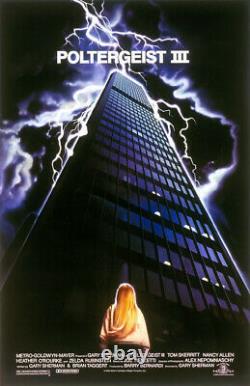 Script Last Dated: June 1987. Written by: Gary Sherman & Brian Taggert. This is an original movie script used during the making of the 1988 film titled, " Poltergeist III". It is likely an original Office Copy used by the production company. It has the original, MGM, production cover.

The pages inside have black copy marks which is just how the production company printed this specific draft. The Title Page has a tear on the upper right corner where a name was removed. Please view the 4th picture provided above. It is complete and it is 112 pages long. Please view all of the pictures above carefully.

This script is in good overall condition. Carol Anne has been sent to live with her Aunt and Uncle in an effort to hide her from the clutches of the ghostly Reverend Kane, but he tracks her down and terrorises her in her relatives' appartment in a tall glass building. Will he finally achieve his target and capture Carol Anne again, or will Tangina be able, yet again, to thwart him? THE POSTER SHOWN IN THE LAST PICTURE ABOVE IS NOT INCLUDED, IT IS JUST BEING USED AS A VISUAL REFERENCE.

We do not sell reproductions or fakes. We have one of the largest collections of original movie screenplays in the world. We also carry scripts used in Television, Broadway, Radio and other forms of entertainment. Every script that we own was hand-picked one at a time over the many years of which we have been collecting. A lot of people, new to collecting, are confused about the word Original. " In terms of movie scripts, the term "Original means that it was used by the production company in the early stages of production or that it was issued out to the cast and crew members during filming, and used at the time of production. Any scripts printed or used in any fashion after filming has completed are known as either a reproduction or a post-production script. These two types of scripts are much less valuable and desirable. All of our scripts are Original.

Whatever actor, producer, director, writer or specific film department you are looking for, we probably have a movie script related to the person you are looking for in some form or fashion. I know that there are a lot of items to search through, but there is definitely something for you. Once you check off this little box it will allow you to search for a specific word that is contained in any of our listings' actual description. Here all of the original movie scripts will be categorized by decade, which will help you to narrow down what you are looking for by the year it was made. The item "POLTERGEIST III / Lawrence Kasdan 1987 Screenplay Office Copy, supernatural film" is in sale since Friday, April 30, 2021.