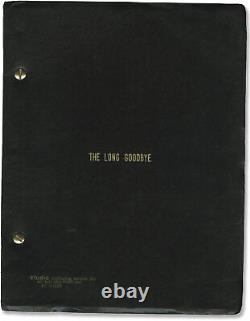 From the estate of film producer Elliott Kastner, whose best known credits include "The Missouri Breaks" (Arthur Penn, 1976), and "Heat" (Michael Mann, 1996). Based on Chandler's 1953 novel, the sixth and penultimate Philip Marlowe book. Screenwriter Leigh Brackett, who also co-wrote the screenplay for "The Big Sleep" (1946), updated not just the setting from the 1950s to the 1970s, but the attitudes, themes, and relationships as well. The result was less of a straight adaptation than it was a satire of the traditional detective story, a New Hollywood classic. Shot on location in Los Angeles, Malibu, Hollywood, and Mexico Black titled Studio Duplicating Service, Inc.

This item is in the category "Entertainment Memorabilia\Movie Memorabilia\Scripts\Originals\Unsigned". The seller is "vanburenantiques" and is located in this country: US. This item can be shipped to North, South, or Latin America, all countries in Europe, Japan, Australia.