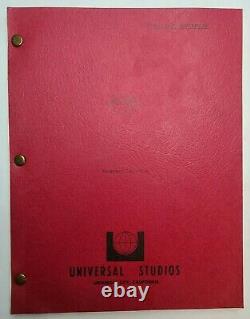 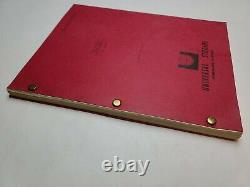 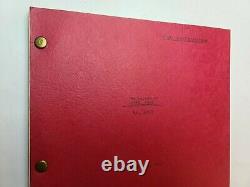 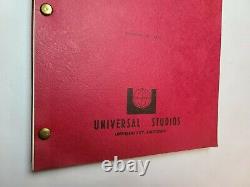 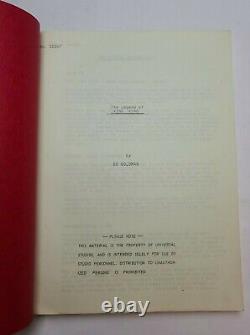 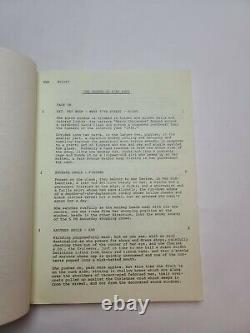 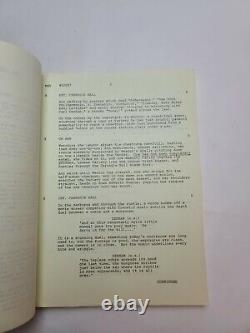 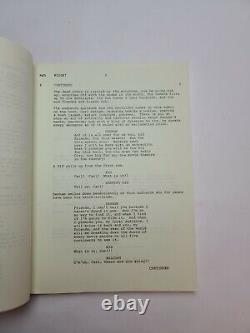 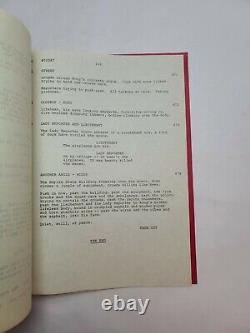 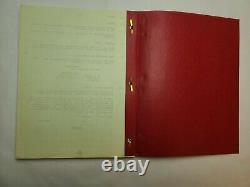 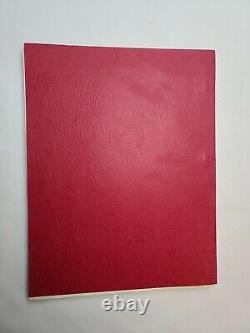 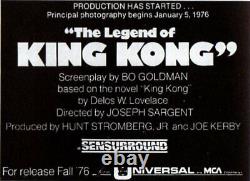 The Legend of King Kong. This is an Original 1975 movie script titled, "The Legend of King Kong". This film was NEVER Produced and it has been left unmade. This Screenplay is written by Bo Goldman. Unproduced scripts are desirable because we will never know how successful the film would have been, and the question remains unanswered. It has the original red, Universal Studios, production cover. It is complete and it is 132 pages long. The front and back covers have some blemishes on them that can be seen under the light. Please view all of the pictures above carefully. The Legend of King Kong is an unmade 1976 remake of King Kong that was to be produced by Universal Pictures.

In 1975, Universal became interested in doing a remake of the original 1933 King Kong, due to the character's recent surge in popularity. This would also be a great next step to follow up on the projected success of their film, Jaws, which was currently in the final stages of production.

Although there was no written contract, Universal was confident that they received verbal approval from RKO. However, they would soon learn that RKO also signed a deal with Dino De Laurentiis and Paramount Pictures to produce a remake of the film with a tentative release date of 1976.

Universal proceeded to sue both Paramount and RKO for the rights to King Kong, claiming that they had a previous oral agreement with RKO to produce their own remake; however, RKO denied such a deal. Counting on this claim to go through, Universal announced they would start filming The Legend of King Kong on January 5, 1976, using the novel as a template, aiming to release the film in the fall. By getting the film into production so quickly, Universal hoped it would pressure Paramount and De Laurentiis to give up production on their film. Universal hired Academy Award-winning screenwriter Bo Goldman to write the screenplay for the film, and hired the relatively unknown but acclaimed Joseph Sargent to direct. Special effects artist Jim Danforth offered to produce the effects for the film using stop-motion animation like in the original film, but Universal worried that it would be far too expensive and planned to have Kong be portrayed by a man in a suit, like he was in King Kong vs.

Godzilla and King Kong Escapes. They also intended to very closely follow the 1933 film, using the same characters, creatures, and general plot of the original film, even keeping it set in 1933.

Eventually, a federal judge ruled that Paramount did in fact have the rights to produce a remake of King Kong, and that RKO had exclusive rights to the 1933 film. This forced Universal to abandon its plans for The Legend of King Kong. However, the judge also ruled that the character rights to Kong belonged to the estate of Merian C. After Paramount and De Laurentiis' rights to King Kong expired, Universal revived the project and hired director Peter Jackson to direct a new remake in the late 1990s, though the releases and subsequent poor receptions of Mighty Joe Young and GODZILLA in 1998 convinced them to postpone the project. Universal and Jackson finally released their remake in December 2005.

We do not sell reproductions or fakes. We have one of the largest collections of original movie screenplays in the world. We also carry scripts used in Television, Broadway, Radio and other forms of entertainment. Every script that we own was hand-picked one at a time over the many years of which we have been collecting. A lot of people, new to collecting, are confused about the word Original. " In terms of movie scripts, the term "Original means that it was used by the production company in the early stages of production or that it was issued out to the cast and crew members during filming, and used at the time of production. Any scripts printed or used in any fashion after filming has completed are known as either a reproduction or a post-production script. These two types of scripts are much less valuable and desirable. All of our scripts are Original..