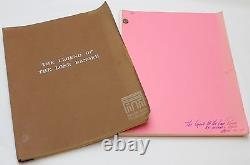 The first script has the original production cover with the name of the film, it also has multi-colored revision pages throughout and some pages containing handwritten notes. The second script has all white pages with a few notes on the back side of the last page. Please view all of the pictures above carefully.

They are in very good overall condition. These scripts were used by Robert Easton. He died in 2011 and was a well know actor in a lot of big name movies. He's even more well known for his dialect coaching.

He coached Al Pacino on his Scarface accent as well as many other famous actors. You may see some hand written notes on some of the pages in this script, which are associated with his dialect coaching. There are certain markings that have different meanings.

I'm not sure exactly what some of the marks mean but it's probably meant to show a pause or to use a different accent at a certain time of the dialogue, or to carry certain vowels longer or shorter. It is a science that Robert Easton mastered and you can see his craft directly in this script. Some of the pages may be dog eared. (folded down at the top corner of the page) He did this to keep track of where he left notes in the script. When the young Texas Ranger, John Reid, is the sole survivor of an ambush arranged by the militaristic outlaw leader, Butch Cavendich, he is rescued by an old childhood Comanche friend, Tonto.

When he recovers from his wounds, he dedicates his life to fighting the evil that Cavendich represents. To this end, John Reid becomes the great masked western hero, The Lone Ranger. With the help of Tonto, the pair go to rescue the President Grant when Cavendich takes him hostage. POSTER IS NOT INCLUDED, IT IS JUST BEING USED AS A VISUAL REFERENCE. Specializes in rare and collectible movie scripts.