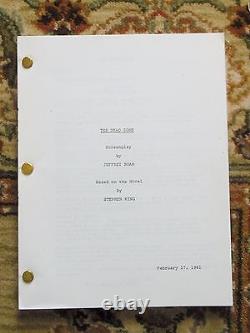 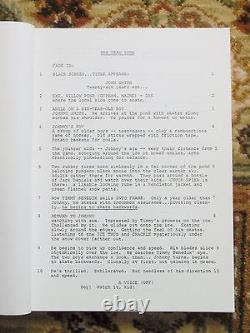 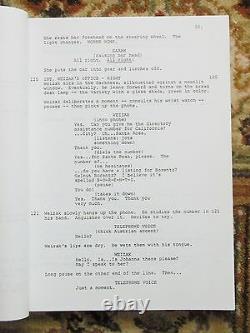 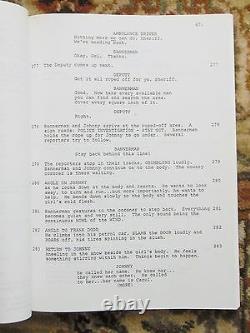 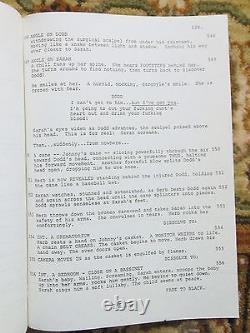 A SCREENPLAY by JEFFREY BOAM, Based on the Novel by STEPHEN KING. This is an EARLY DRAFT SCREENPLAY. The early drafts were written by JEFFREY BOAM for LORIMAR STUDIOS in late 1980 and early 1981. In mid-1981 Dino DeLaurentiis bought the film rights from Lorimar, fired Jeffrey Boam and Hired STEPHEN KING to write the screenplay.

Stephen King's draft screenplays for the film were written in late 1981 and early 1982. However, DeLaurentiis HATED King's scripts, so King was fired. Another writer was brought in who was also fired, then in late 1982 JEFFREY BOAM was rehired, and finally wrote the final script.

So, this EARLY DRAFT is before ALL the CHANGES brought on by various screenplay writers (including King), film studios, etc. An ORIGINAL, UNPUBLISHED, REJECTED, EARLY DRAFT SCREENPLAY by JEFFREY BOAM, before he was later rehired to rewrite the screenplay.

The screenplay is dated "February 17, 1981", as shown on the title page. The later, very different screenplay that Boam was rehired to write (after King's screenplay was rejected), was finished on November 8, 1982, a year and nine months after this draft. The film itself was released on October 8, 1983. Pages are photocopied on 8.5" x 11" paper (photocopying was, and still is, how original copies of a draft script were quickly produced and distributed to film producers, agents, directors, and others involved in a motion picture production), pages printed on one side only 124 pages plus a title page. About the Film THE DEAD ZONE and its Various SCREENPLAY ITERATIONS including the KING SCREENPLAY DRAFT (from Wikipedia).

The Dead Zone is a 1983 American horror thriller film Directed by David Cronenberg. The Screenplay by Jeffrey Boam was based on the 1979 novel of the same name by Stephen King. The film stars Christopher Walken,, Brooke Adams, Tom Skerritt, Herbert Lom, Anthony Zerbe, Colleen Dewhurst and Martin Sheen. The plot revolves around a schoolteacher, Johnny Smith (Walken), who awakens from a coma to find he has psychic powers. Lorimar Film Entertainment began developing The Dead Zone film adaptation.

Producer Carol Baum gave the book to screenwriter Jeffrey Boam and asked him to write a screenplay. "I saw it had great possibilities and agreed to do it, " Boam said. He developed a script for director Stanley Donen, who left the project before the film reached production at Lorimar. Lorimar eventually closed its film division, after a series of box-office failures, to concentrate on Television (Lorimar later tentatively reopened its film production).

However, after receiving STEPHEN KING'S DRAFT SCREENPLAY, De Laurentiis reportedly rejected King's script as "involved and convoluted". David Cronenberg, who ultimately directed the film, said that he also decided not to the use Stephen King's script, finding it "needlessly brutal". After rejecting Stephen King's Draft De Laurentiis later rejected another script, one written by Andrei Konchalovsky, before eventually returning to Jeffrey Boam to write yet another script.

De Laurentiis hired producer Debra Hill to work with Cronenberg and Boam. For DeLaurentiis, Boam abandoned his early draft and instead completely refashioned Stephen King's screenplay. He abandoned King's parallel story structure for The Dead Zone's screenplay, turning the plot into separate episodes. Boam told writer Tim Lucas in 1983, King's book is longer than it needed to be. The novel sprawls and it's episodic.

What I did was use that episodic quality, because I saw The Dead Zone as a triptych. Boam's script was revised and condensed four times by Cronenberg, who eliminated large portions of the novel's story, including plot points about Johnny Smith having a brain tumor. Director Cronenberg, screenplay writer Boam, and Producer Hill had script meetings to revise the screenplay page by page, with no consultation from Stephen King. Boam's "triptych" in the screenplay surrounds three acts: the introduction of Johnny Smith before his car accident and after he awakes from a coma, a story about Smith assisting a sheriff track down the Castle Rock Killer, and finally Johnny deciding to confront the politician Stillson. Boam submitted the final draft of the screenplay on November 8, 1982.