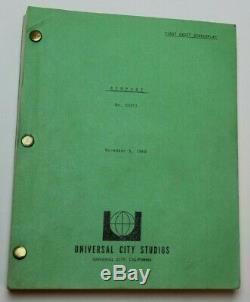 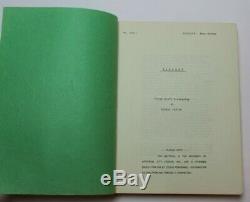 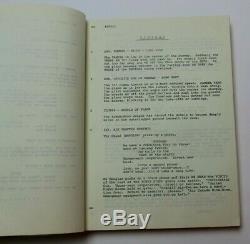 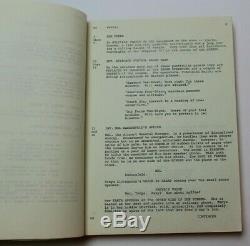 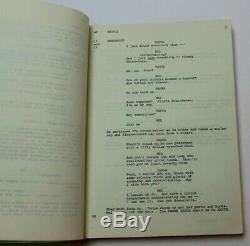 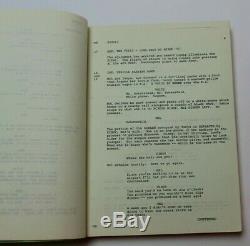 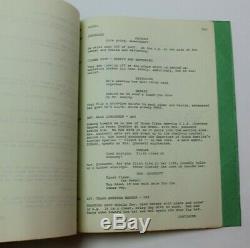 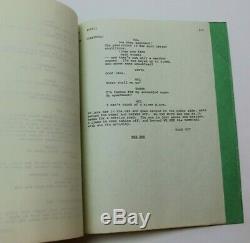 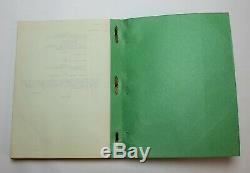 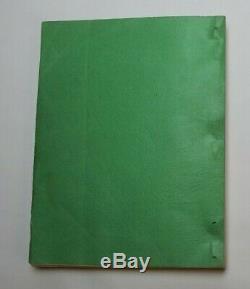 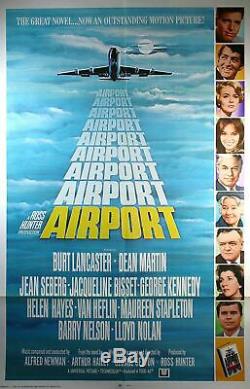 Script Dated: November 5, 1968. This is an Original Movie Script used during the making of the 1970 Disaster film titled, "Airport". This script is the First Draft dated November 5, 1968. It has the original green Universal Studios production cover.

It has all of the, eye rest, studio issued pages throughout inside. This script is complete and it is 201 pages long.

The brass brads are poking through the back cover. Please view all of the pictures provided above. It is in good overall condition. This precursor to later "epic" 70's disaster films illustrates 12 hours in the lives of the personnel and passengers at the Lincoln Airport. Endless problems, professional and personal, are thrown at the various personnel responsible for the safe and proper administration of air traffic, airline management and aviation at a major US airport.

Take one severe snowstorm, add multiple schedules gone awry, one elderly Trans Global Airlines stowaway, shortages, an aging, meretricious pilot, unreasonable, peevish spouses, manpower issues, fuel problems, frozen runways and equipment malfunctions and you get just a sample of the obstacles faced by weary, disgruntled personnel and passengers at the Lincoln Airport. Toss in one long-suffering pilot's wife, several stubborn men, office politics and romance and one passenger with a bomb and you have the film "Airport" from 1970. POSTER IS NOT INCLUDED, IT IS JUST BEING USED AS A VISUAL REFERENCE. Specializes in rare and collectible movie scripts. Our scripts are genuine, authentic and screen used.

We also carry movie props from no genre in particular. Furthermore, all of our items that are not props or scripts can be found in our Other Memorabilia category. We do not sell reproductions or fakes. We have one of the largest collections of original movie screenplays in the world. We also carry scripts used in Television, Broadway, Radio and other forms of entertainment. Every script that we own was hand-picked one at a time over the many years of which we have been collecting. A lot of people, new to collecting, are confused about the word Original.