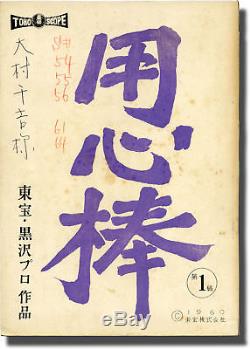 Yojimbo (Original screenplay for the 1961 film). Author: Kurosawa, Akira (director); Ryuzo Kikushima (screenwriter); Toshiro Mifune, Takashi Shimura (starring) Title: Yojimbo (Original screenplay for the 1961 film) Publication: Tokyo: Kurosawa Production Company, 1960. Description: Shooting script for the legendary 1961 Japanese film. Working copy belonging to Omura Senkichi, who played a small role as a traveling servant in the film, with his name on the front wrapper and his annotations throughout. Though not credited as such, based thematically on Dashiell Hammett's 1929 novel, "Red Harvest, " and subsequently the basis for many other films, including "A Fistful of Dollars" (Sergio Leone, 1964), "Django" (Sergio Corbucci, 1966), and "Last Man Standing" (Walter Hill, 1996).

Director Kurosawa has been quoted as saying that many plot elements from another Hammett novel, "The Glass Key, " make up the film. All titles and text in Japanese. White perfect bound wrappers with purple and black titles. 164 pages, printed on recto and verso, right to left in the Japanese style, with last page numbered d-33. Light foxing and age toning to both pages and wrapper, else Very Good condition.

Subject: 1960s Cinema, Directors, Film Scripts, Japanese Cinema, Western, World Cinema. Royal Books is located in the midtown area of Baltimore, Maryland. Since 1996, we have specialized in rare books and paper relating to twentieth century literature, genre fiction, the arts, and popular culture, with a particular emphasis on cinema. All books noted as First Editions are also First Printings unless indicated otherwise. This listing was created by Bibliopolis. The item "Akira Kurosawa YOJIMBO Original screenplay for the 1961 film 1960 #143066" is in sale since Monday, April 8, 2019. This item is in the category "Entertainment Memorabilia\Movie Memorabilia\Scripts\Originals\Unsigned". The seller is "vanburenantiques" and is located in Baltimore, Maryland. This item can be shipped worldwide.