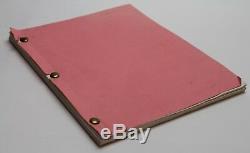 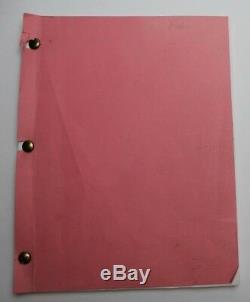 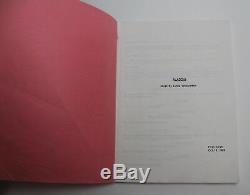 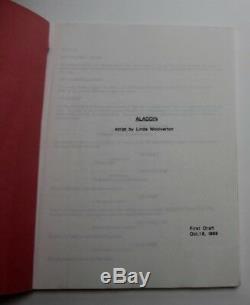 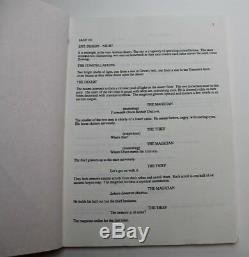 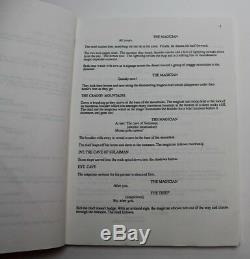 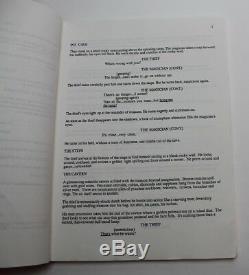 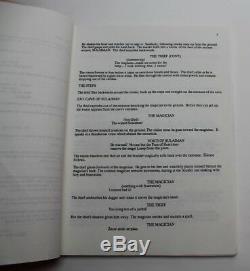 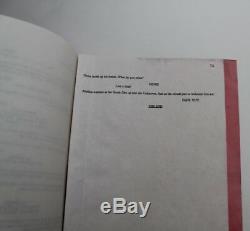 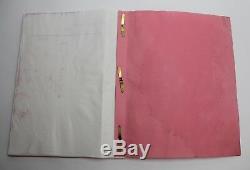 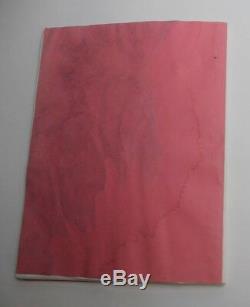 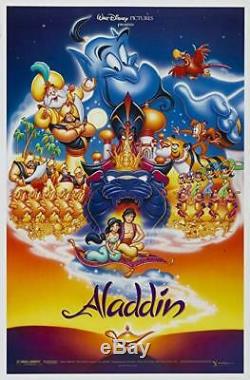 Script Dated: October 18, 1989. This is an Original Movie Script used by the production company in the early stages of 1992 Disney Film, "Aladdin".

This script is an early First Draft dated from 1989 and it is written by, Linda Woolverton. This is an extremely rare First Draft script with some major differences from the final film.

I have provided pictures of the first several pages of this script above, you will see just in those few pages some differences already. This script has all white pages inside and it is 72 pages long.

The back cover has a. The cover has done a great job protecting the pages inside and the inner pages do not have a big stain mark, except for the last page. All of the pages inside can be read easily and the water damage you see is cosmetic only with no affect on reading the entire script, only some wrinkling to the pages. Please view all of the pictures provided above. It is in good overall condition.

Aladdin is a poor street urchin who spends his time stealing food from the marketplace in the city of Agrabah. His adventures begin when he meets a young girl who happens to be Princess Jasmine, who is forced to be married by her wacky yet estranged father. Aladdin's luck suddenly changes when he retrieves a magical lamp from the Cave of Wonders.

What he unwittingly gets is a fun-loving genie who only wishes to have his freedom. Little do they know is that the Sultan's sinister advisor Jafar has his own plans for both Aladdin and the lamp. Info about writer, Linda Woolverton. In 1988, lyricist Howard Ashman pitched the idea of an animated musical adaptation of Aladdin. Ashman had written a 40-page film treatment remaining faithful to the plot and characters of the original story, but envisioned as a campy 1930s-style musical with a Cab Calloway/Fats Waller-like Genie. Along with partner Alan Menken, Ashman conceived several songs and added Aladdin's friends named Babkak, Omar, and Kasim to the story. However, the studio was dismissive of Ashman's treatment and removed the project from development.

Ashman and Menken were later recruited to compose songs for Beauty and the Beast. Linda Woolverton , who had also worked on Beauty and the Beast, used their treatment and developed a draft with inspired elements from The Thief of Bagdad such as a villain named Jaf'far, an aged sidekick retired human thief named Abu, and a human handmaiden for the princess. Then, directors Ron Clements and John Musker joined the production, picking Aladdin out of three projects offered, which also included an adaptation of Swan Lake and King of the Jungle that eventually became The Lion King. Before Ashman's death in March 1991, Ashman and Menken had composed "Prince Ali" and his last song, "Humiliate the Boy". Musker and Clements wrote a draft of the screenplay, and then delivered a story reel to studio chief Jeffrey Katzenberg in April 1991.

Katzenberg thought the script "didn't engage", and on a day known by the staff as "Black Friday, " demanded that the entire story be rewritten without rescheduling the film's November 25, 1992 release date. Among the changes Katzenberg requested from Clements and Musker were to not be dependent on Ashman's vision, and the removal of Aladdin's mother, remarking, Eighty-six the mother. The mom's a zero.

Screenwriting duo Ted Elliott and Terry Rossio were brought in to rework the story, and the changes they made included the removal of Aladdin's mother, the strengthening of the character of Princess Jasmine, and the deletion of several of the Ashman-Menken songs. Aladdin's personality was rewritten to be "a little rougher, like a young Harrison Ford, " and the parrot Iago, originally conceived as an uptight British archetype, was reworked into a comic role after the filmmakers saw Gilbert Gottfried in Beverly Hills Cop II, who was then cast for the role. By October 1991, Katzenberg was satisfied with the new version of Aladdin. As with Woolverton's screenplay, several characters and plot elements were based on the 1940 version of The Thief of Bagdad, though the location of the film was changed from Baghdad to the fictional Arabian city of Agrabah. POSTER IS NOT INCLUDED, IT IS JUST BEING USED AS A VISUAL REFERENCE.