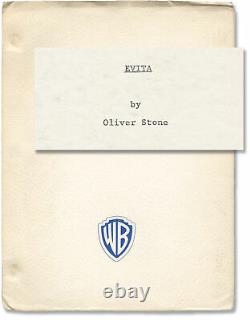 The film went through many iterations of production, passing between studios and directors, with Parker returning to direct in 1994 after having initially rejected the opportunity in 1979. The copy seen here was written by Oliver Stone, who was originally slated to direct but would leave the project in 1994 over rising production costs. Set in Argentina and Europe, shot on location in Hungary, Argentina, Spain, and England. White generic Warner Brothers wrappers.

Subject: 1990s Cinema, Film Scripts, Films Based on Plays, Musical, Romance. Royal Books is located in the midtown area of Baltimore, Maryland. Since 1996, we have specialized in rare books and paper relating to twentieth century literature, genre fiction, the arts, and popular culture, with a particular emphasis on cinema. All books noted as First Editions are also First Printings unless indicated otherwise. This listing was created by Bibliopolis.