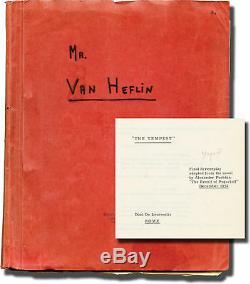 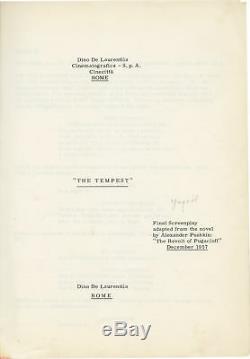 A young officer in the army of Empress Catherine of Russia is on his way to his new duty station at a remote outpost. During a blinding snowstorm he comes upon a stranger who was caught in the storm and is near death from freezing. He rescues the man and eventually brings him back to health. When the man is well enough to travel, the two part company and the man vows to repay the officer for saving his life. Will their paths cross again?

Filmed on location in Belgrade, Serbia. Red titled wrappers, noted as copy No.

3 on the front wrapper. Title page present, dated December 1957, noted as Final Screenplay, with credit for writer Pushkin. 142 leaves, mimeograph, with notations throughout. Pages Near Fine, wrapper Near Fine, internally bound with two gold brads. Subject: Actors, Adventure, Film Scripts. Royal Books is located in the midtown area of Baltimore, Maryland. Since 1996, we have specialized in rare books and paper relating to twentieth century literature, genre fiction, the arts, and popular culture, with a particular emphasis on cinema.

The item "Alberto Lattuada TEMPEST Original screenplay for the 1958 film actor #130852" is in sale since Monday, April 8, 2019. This item is in the category "Entertainment Memorabilia\Movie Memorabilia\Scripts\Originals\Unsigned". The seller is "vanburenantiques" and is located in Baltimore, Maryland. This item can be shipped worldwide.