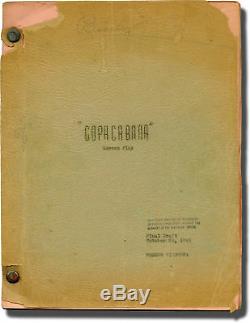 Marx plays an incompetent theatrical agent whose only client is Carmen Miranda, in her first film after leaving Twentieth Century-Fox, and who he tries to pass off as two different performers. Set in New York City, and shot there on location. Tan titled wrappers, noted as Final Draft on the front wrapper, dated October 28, 1946. Title page integral with the first page of the text. 97 leaves, with last page of text numbered 97.

Pages Near Fine, wrapper Good, bound with two silver brads. Subject: 1940s Cinema, Actors, Comedy, Film Scripts, Musical. Royal Books is located in the midtown area of Baltimore, Maryland. Since 1996, we have specialized in rare books and paper relating to twentieth century literature, genre fiction, the arts, and popular culture, with a particular emphasis on cinema. All books noted as First Editions are also First Printings unless indicated otherwise.

This listing was created by Bibliopolis. Green COPACABANA Original screenplay for the 1947 film 1946 #143611" is in sale since Saturday, March 30, 2019. This item is in the category "Entertainment Memorabilia\Movie Memorabilia\Scripts\Originals\Unsigned". The seller is "vanburenantiques" and is located in Baltimore, Maryland.