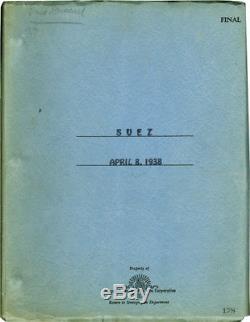 Loosely based on the events surrounding the construction of the Suez Canal, the film stirred controversy upon its release when the descendants of main characters Matthieu and Ferdinand de Lesseps unsuccessfully sued the studio for libel. With all the elaborate costuming, special effects, and production costs typical of a Zanuck picture, its cinematic qualities do their best to offset what can only be called a very unique take on historical accuracy.

Nominated for the Academy Awards for Best Cinematography, Best Original Score, and Best Sound Recording. Power and Annabella were married shortly after the film's release.

Set in Paris and Egypt, shot on location in Arizona and California. Pale blue titled wrappers, noted as FINAL on the front wrapper, rubber-stamped copy No. 178, dated April 8, 1938.

Royal Books is located in the midtown area of Baltimore, Maryland. Since 1996, we have specialized in rare books and paper relating to twentieth century literature, genre fiction, the arts, and popular culture, with a particular emphasis on cinema. All books noted as First Editions are also First Printings unless indicated otherwise. This listing was created by Bibliopolis. The item "Allan Dwan SUEZ Original screenplay for the 1938 film #132192" is in sale since Monday, April 8, 2019. This item is in the category "Entertainment Memorabilia\Movie Memorabilia\Scripts\Originals\Unsigned". The seller is "vanburenantiques" and is located in Baltimore, Maryland.