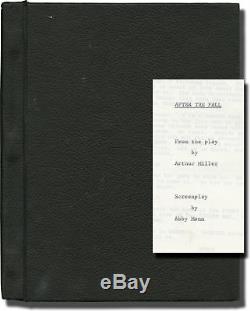 After the Fall (Original screenplay for an unproduced film, circa 1970s). Author: Miller, Arthur (playwright); Abby Mann (screenwriter) Title: After the Fall (Original screenplay for an unproduced film, circa 1970s) Publication: N. Description: Original typescript screenplay for an unproduced film called "After the Fall, " based on Arthur Miller's 1964 play about a Jewish intellectual living in New York. Miller's play opened on Broadway in 1964, at the ANTA Washington Square Theatre, ran for 208 performances, and closed on May 29, 1965. A television movie of the play was released in 1974, but Mann appears to have not been involved in the project. Title page present, undated, with credits for playwright Miller and screenwriter Mann. 195 leaves, with last page of text numbered 194. Pages and wrapper Near Fine, bound in a black spring binder. Subject: Broadway, Film Scripts, Films Based on Plays, Jewish History, Culture, and Judaica, Play Scripts, Unproduced Films, Writers. Royal Books is located in the midtown area of Baltimore, Maryland. Since 1996, we have specialized in rare books and paper relating to twentieth century literature, genre fiction, the arts, and popular culture, with a particular emphasis on cinema. All books noted as First Editions are also First Printings unless indicated otherwise. This listing was created by Bibliopolis.

The item "Arthur Miller AFTER THE FALL Original screenplay for an unproduced film #137404" is in sale since Monday, April 8, 2019. This item is in the category "Entertainment Memorabilia\Movie Memorabilia\Scripts\Originals\Unsigned".

The seller is "vanburenantiques" and is located in Baltimore, Maryland. This item can be shipped worldwide.
fullcastautographedfilmmoviepagerareauthenticunproducedsignedhorrordavidgeorgejohnscreendraftbeckettwarsdisneyscreenplayrobertkingvintageusedstarautographpropcopyfirstmichaelposteroriginalscriptjamesbook