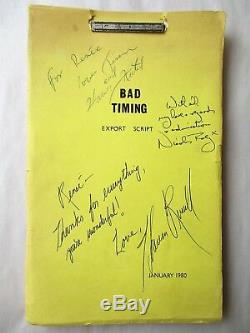 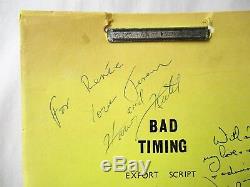 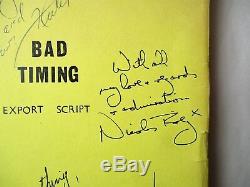 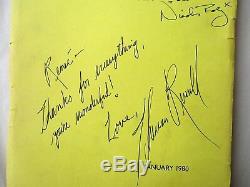 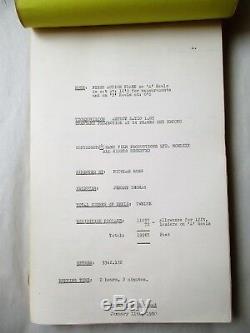 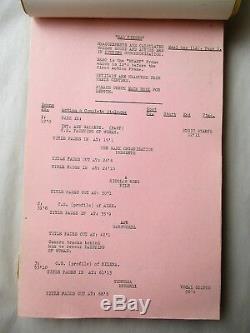 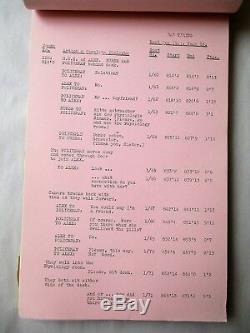 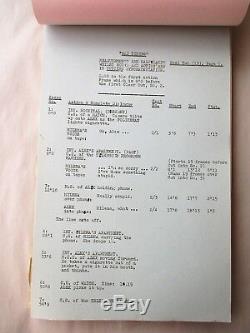 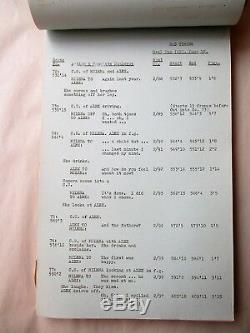 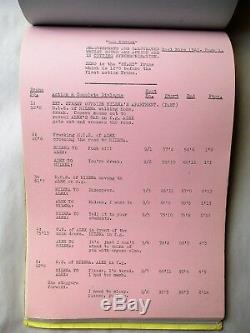 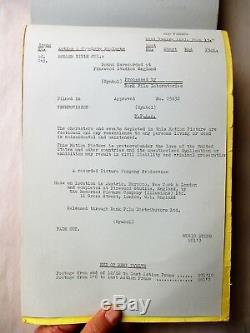 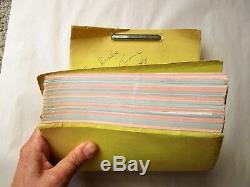 Original BAD TIMING FILM SCRIPT / SCREENPLAY. Called an EXPORT SCRIPT, this British Film Script was meant for the American Distributor, it reads like a Film Continuity Screenplay / Script, with every scene in the film fully described, including all dialogue, as it was originally shot in U.

HAND SIGNED and LOVINGLY INSCRIBED by Director NICOLAS ROEG, Star HARVEY KEITEL, Star THERESA RUSSELL, and the film's producer JEREMY THOMAS. The SCRIPT is Signed and Inscribed on the front cover to a RENÉE. Nicolas Roeg, Theresa Russell, and Jeremy Thomas each hand wrote an inscription above their signature.

Harvey Keitel hand wrote and Signed in his hand, "and / Harvey Keitel" below the inscription and signature of Jeremy Thomas. Here are the inscriptions and signatures. "For Renée / love Jeremy". "With all / my love & regards / & admiration / Nicolas Roeg". Renée / Thanks for everything, / you're wonderful! / Love, / Theresa Russell. I have no real idea who Renée is, however there is a Renée Shafransky who was involved in some capacity in the 1985 Roeg / Russell film Insignificance and perhaps others perhaps even on Bad Timing in an uncredited capacity? ; she later married Spalding Gray and worked with him on his films, and produced some of her own films. She is now a Psychiatrist in New York City which is pretty weird if she IS the Renée that this Bad Timing script is dedicated too! Also, Harvey Keitel has a sister named Renée. But, again, I really do know for certain who this Renée is.

Yellow paper covers, white title page, blue and pink inner pages, 8x13 inches, pages printed on one side only, two hole punched at the top, bound with a metal bracket. The pink and blue pages were used to separate the "reels", i.

The the first pink page is Reel 1 (1A). Pages are numbered by Reel i.

Twelve numbered sections on alternating pink and blue paper, there are a total of 197 pages plus the white title page. The front cover is pulled and worn at its two upper binding holes, is creased with small closed tears along the edges where it overhangs the inner pages, and is toned and creased at the upper margin; the rear cover is worn along its overhang and has some soiling; the metal bracket is tarnished and rusting a bit.

Internally the pages are very nice, bright, clean, clear and unmarked. ALL the INSCRIPTIONS and SIGNATURES on the front cover are bright and clear. Interesting Note: Theresa Russell and Nicolas Roeg met on the set of Bad Timing and were married in 1982. Nobody is quite sure when Roeg and Russell got divorced.

This script was obviously signed while their hearts were beating fast for each other. There is a Wikipedia page for Nicolas Roeg, Theresa Russell, Harvey Keitel, Jeremy Thomas, and even Renée Shafransky.

Here is a bit about Nicolas Roeg (one of the great film directors of the 20th century imho) from Wikipedia. Nicolas Jack Roeg CBE BSC, b. 2018, was an English film director and former cinematographer. He is best known for directing the films Performance, Walkabout, Don't Look Now, The Man Who Fell to Earth, Bad Timing and The Witches. Making his directorial debut 23 years after his entry into the film business, Roeg quickly became known for an idiosyncratic visual and narrative style, characterized by the use of disjointed and disorientating editing to great effect.

He is considered a highly influential filmmaker. Directors such as Steven Soderbergh, Christopher Nolan and Danny Boyle cite him as one of their major influences.

About BAD TIMING (from Wikipedia). Bad Timing is a 1980 British psychological thriller film directed by Nicolas Roeg and starring Art Garfunkel, Theresa Russell, Harvey Keitel and Denholm Elliott. The plot focuses on an American woman and a psychology professor living in Vienna, and, largely told through nonlinear flashbacks, examines the details of their turbulent relationship as uncovered by a detective investigating her apparent suicide attempt. The film was also shown under the title Bad Timing: A Sensual Obsession before being shelved by the distributor. The item "BAD TIMING FILM SCRIPT SIGNED by NICOLAS ROEG, HARVEY KEITEL, THERESA RUSSELL +1" is in sale since Tuesday, January 15, 2019.

This item is in the category "Entertainment Memorabilia\Movie Memorabilia\Scripts\Originals\Signed". The seller is "bookpath" and is located in Napa, California. This item can be shipped worldwide.