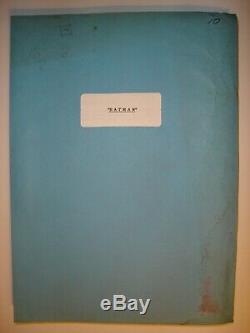 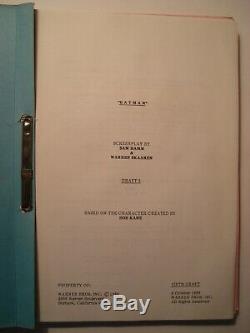 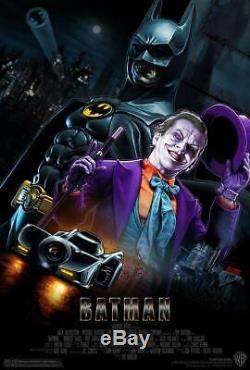 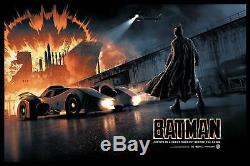 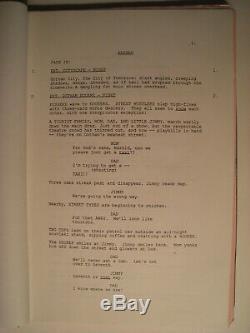 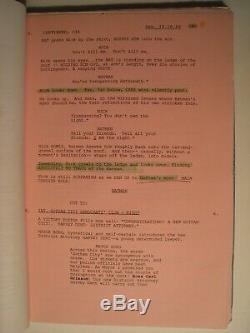 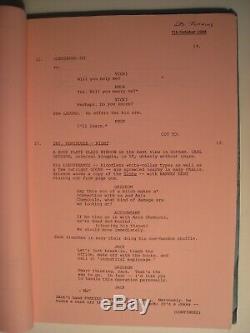 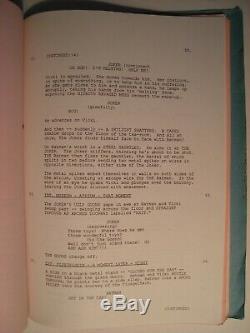 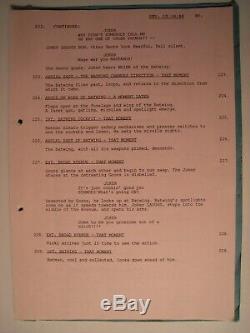 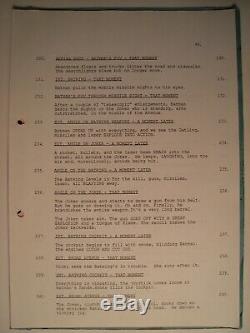 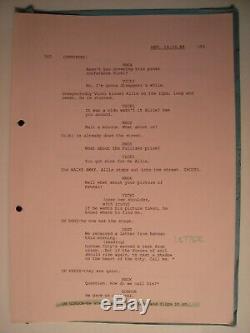 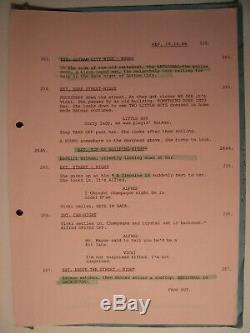 This is an original screenplay from the 1989 blockbuster super hero movie BATMAN, directed by Tim Burton and starring Jack Nicholson as the Joker and Michael Keaton as Bruce Wayne / Batman. It is the Fifth Draft shooting script dated October 6, 1988 and was printed in England where the film was made.

It formerly belonged to Les Tomkins, the Supervising Art Director and was his working script. There are approximately 110 pages which are complete without any missing page numbers. Included are white pages, a single pink revision page dated October 7, 1988 (with Les Tomkins' name written on it) and about 55 pink revision pages dated October 10, 1988. The pages are held between front and rear light blue covers with a silver prong and slide bar fastener (that have rust on them from age). The blue covers have some moderate wear and darkening in areas.

The front cover has very light staining around the bottom right corner, which did not bleed through to the title page. Les Tompkins marked his script in places relating to props, sets and visual effects. About 20 pages have green highlighted sentences, a couple pages have slight orange highlighting, a few pages have diagonal lines, underlining or check marks, and about 10 pages have his brief handwritten notes on them. Aside from his marking, the pages are in good shape and well preserved. The two movie posters shown in the ad photos are NOT included with the script.

They only represent advertising used to promote the film. It was the fifth highest grossing film in history at the time of its release. On designing the Batmobile the production designer explained, We looked at jet aircraft components, we looked at war machines, we looked at all sorts of things. In the end, we went for pure expressionism, taking the Salt Flat Racers of the 30's and the Sting Ray macho machines of the 50's.

The car was built upon a Chevrolet Impala when previous development with a Jaguar and Ford Mustang failed. A respected contemporary reviewer states: No superlatives are too extravagant for Tim Burton's 1989 triumph.

This extremely rare script would be a great acquisition for a Batman collector. The script is for sale only in the United States.

The item "BATMAN original 1989 movie script / TIM BURTON, JACK NICHOLSON, MICHAEL KEATON" is in sale since Thursday, December 19, 2019. This item is in the category "Entertainment Memorabilia\Movie Memorabilia\Scripts\Originals\Unsigned". The seller is "hpalmer66" and is located in Maynard, Massachusetts.