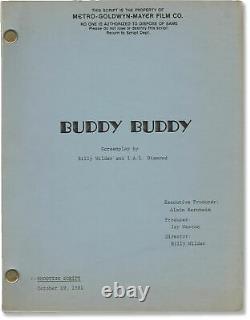 Description: Shooting Script for the 1981 film. Based on a play by French playwright Francis Veber, and on the 1973 French-Italian film, L'emmerdeur. " A professional killer going by the name of Trabucco (Matthau) on his way to "take care of a gangster, bumps into a forlorn man named Victor Clooney (Lemmon). Clooney's wife has left him for the head of a sex clinic, Dr.

Trabucco sets up his rifle in a hotel room, ready to make the hit, but is interrupted by Clooney trying to hang himself in the adjoining room. Trabucco briefly stops Clooney from hanging, but he gets away and climbs onto the ledge of the hotel window. When Victor finds out that his wife is filing for divorce, he again attempts suicide, the doctor and his wife following.

They try to stop Victor with a sedative but stick Trabucco with the needle instead. The two men are left hopeless but Victor promises to help Trabucco with his hit. Light blue titled wrappers, noted as Shooting Script on the front wrapper, dated October 19, 1981, with credits for director-writer Wilder, writer Diamond, and producers Bernheim and Weston. Title page present with credits for screenwriters Wilder and Diamond, and for writer Veber. Pages Fine, wrapper Fine, bound with two gold brads.