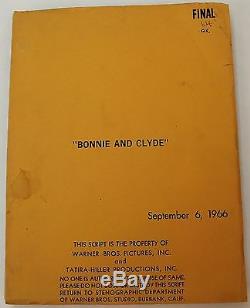 David Newman & Robert Benton. Script Dated: September 6, 1966. This is an original movie script from the 1967 classic film Bonnie and Clyde.

It has multi-colored revision pages and the original Warner Bros. It is in very good condition.

A bored small-town girl and a small-time bank robber leave in their wake a string of violent robberies and newspaper headlines that catch the imagination of the Depression-struck Mid-West in this take on the legendary crime spree of these archetypal lovers on the run. POSTER IS NOT INCLUDED, IT IS JUST BEING USED AS A VISUAL REFERENCE. Specializes in rare and collectible movie scripts.

The item "BONNIE AND CLYDE / David Newman 1966 Movie Script Screenplay, Warren Beatty" is in sale since Saturday, April 13, 2019. This item is in the category "Entertainment Memorabilia\Movie Memorabilia\Scripts\Originals\Unsigned". The seller is "themoviewizard" and is located in Van Nuys, California.