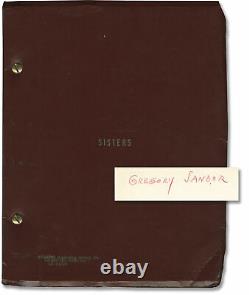 Copy belonging to cinematographer Gregory Sandor, with his name in holograph pencil on the verso of the title page, and holograph pencil annotations throughout. Danielle is a beautiful model separated from her conjoined twin, Dominique. When her neighbor, an aspiring journalist, suspects Danielle of a brutal murder, the horror of Danielle's disturbing past begins to surface.

Director Brian De Palma based his original story on a Life magazine article about conjoined twins in the Soviet Republic who had been successfully separated, but were experiencing psychological problems as a result of the operation. With its use of visually dense point-of-view and split-screen camera techniques, "Sisters" is one of De Palma's earliest forays into erotic voyeurism as a conduit for psychological horror, paving the way for a string of idiosyncratic, psychosexual projects in the ensuing years, such as "Obsession" (1976), "Dressed to Kill" (1980), "Blow Out" (1981), and "Body Double" (1984), among others. Given its focus on the anxiety of the gaze, "Sisters" can also be read as an homage to Alfred Hitchcock-openly referencing "Rope" (1948), "Rear Window" (1954), and "Psycho" (1960)-and indeed, the film was even scored by Bernard Hermann, a frequent musical collaborator for Hitchcock's films. Set and shot on location in New York. Title page present, dated 1970, with credits for screenwriters Brian De Palma and Louisa Rose.