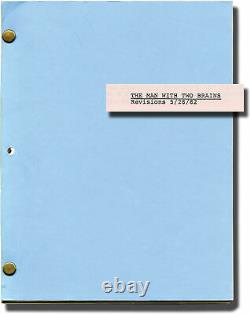 The third of four films pairing director Carl Reiner and comedian Steve Martin that established Martin's film career. Here he plays a quirky doctor who instigates a comedy of errors after operating on a woman whom he injures in a car accident. Though not as popular as their first pairing, the unarguable classic 1979 film "The Jerk, " "The Man with Two Brains" nevertheless remains a minor comic gem.

Subject: 1980s Cinema, Actors, Comedy, Film Scripts. Royal Books is located in the midtown area of Baltimore, Maryland. Since 1996, we have specialized in rare books and paper relating to twentieth century literature, genre fiction, the arts, and popular culture, with a particular emphasis on cinema.