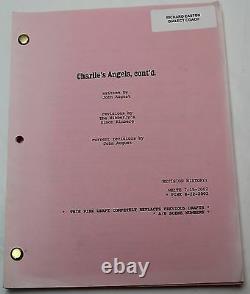 This is an original movie script from the 2003 film " Charlie's Angels: Full Throttle ". It has pink colored pages throughout the entire script. There is some discoloration around the edges of the script from storage.

P lease view all of the pictures above. This movie script is an awesome piece of movie memorabilia. The Angels--Natalie, Dylan, and Alex are back again but this time they're preparing for a strike without even warning as they go undercover to retrieve two missing silver bands. These are no ordinary rings.

They contain valuable encrypted information that reveal the new identities of every person in the Federal Witness Protection Program. When witnesses start turning up dead, only the Angels, using their expertise as masters of disguise, espionage and martial arts can stop the perpetrator, a mysterious "fallen" Angel.

Aided by their trusty colleague, Jimmy Bosley, the Angels' adventure begins at a remote Mongolian outpost and ends only after Dylan is forced to face a dark secret from her past--a secret that puts the lives of her two best friends in danger. POSTER IS NOT INCLUDED, IT IS JUST BEING USED AS A VISUAL REFERENCE. Specializes in rare and collectible movie scripts.

Our scripts are genuine, authentic and screen used. We also carry movie props from no genre in particular. Furthermore, all of our items that are not props or scripts can be found in our Other Memorabilia category. We do not sell reproductions or fakes. We have one of the largest collections of original movie screenplays in the world. We also carry scripts used in Television, Broadway, Radio and other forms of entertainment. Every script that we own was hand-picked one at a time over the many years of which we have been collecting. A lot of people, new to collecting, are confused about the word Original. " In terms of movie scripts, the term "Original means that it was used by the production company in the early stages of production or that it was issued out to the cast and crew members during filming, and used at the time of production. Any scripts printed or used in any fashion after filming has completed are known as either a reproduction or a post-production script. These two types of scripts are much less valuable and desirable. All of our scripts are Original. An original movie script has a lot of character in the item itself and every one of them is different in some way or another. There is usually only one script given to each crew member during production, however, sometimes they do get more than one.

The older a film is you also have to figure in the fact that a lot of the original movie scripts have been thrown out or destroyed over time. We do our best to provide the widest selection of original movie scripts in the world. Whatever actor, producer, director, writer or specific film department you are looking for, we probably have a movie script related to the person you are looking for in some form or fashion. I know that there are a lot of items to search through, but there is definitely something for you. Once you check off this little box it will allow you to search for a specific word that is contained in any of our listings' actual description. Here all of the original movie scripts will be categorized by decade, which will help you to narrow down what you are looking for by the year it was made. The item "Charlie's Angels Full Throttle 2002 Movie Script Cameron Diaz, Drew Barrymore" is in sale since Saturday, May 30, 2020.