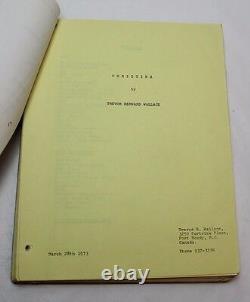 Script Dated: March 28, 1973. This is an Original Movie Script from the 1974 movie, Christina. It has multi-colored revision pages. It is 95 pages long. Please view all of the pictures provided above. It is in very good overall condition. During their honeymoon, he starts to fall in love with her, but she suddenly disappears. When he tries to find her, it puts his life in danger. POSTER IS NOT INCLUDED, IT IS JUST BEING USED AS A VISUAL REFERENCE. Specializes in rare and collectible movie scripts. Our scripts are genuine, authentic and screen used. We also carry movie props from no genre in particular. Furthermore, all of our items that are not props or scripts can be found in our Other Memorabilia category.