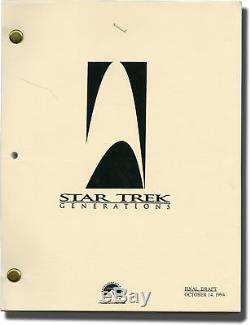 Kirk (William Shatner), Montgomery Scott (James Doohan), and Pavel Chekov (Walter Koenig). "Generations" finds Captain Kirk, already presumed dead, trapped in a spatial anomaly with Picard, the work of deranged scientist, and the pair must work together in order to stop him.

This script reflects a late change made to the script in which Kirk dies sacrificing himself, as opposed to simply being shot by the scientist. Nominated for a Hugo Award. Tan titled wrappers, noted as FINAL DRAFT on the front wrapper, dated October 14, 1994. Title page present, dated October 14, 1994, noted as FINAL DRAFT, with credits for screenwriter/story writers Ronald D.

This listing was created by Bibliopolis. The item "David Carson STAR TREK GENERATIONS Original screenplay for the 1994 film #140236" is in sale since Monday, April 8, 2019. This item is in the category "Entertainment Memorabilia\Movie Memorabilia\Scripts\Originals\Unsigned". The seller is "vanburenantiques" and is located in Baltimore, Maryland. This item can be shipped worldwide.