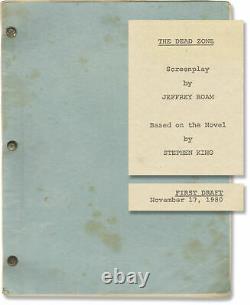 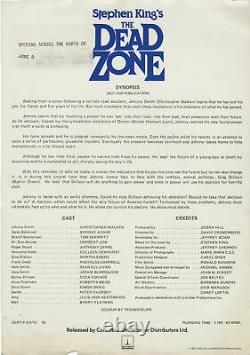 Description: First Draft script for the 1983 film. Accompanied by a twenty-page German language program and single-page English promotional synopsis for the film. An early draft, written by screenwriter Jeffrey Boam a year after the novel's release at the request of Lorimar Film Entertainment, before they shuttered their film division and the rights went to Dino De Laurentiis. This draft of the script includes a gruesome ending in which Johnny has a vision of the Castle Rock serial killer as he dies, which director David Cronenberg later requested be revised. Based on the 1979 novel by Stephen King, about a man who wakes up from a five year coma with an uncontrollable psychic power: the ability to see the past and future of anyone he touches.

King is said to have approved of Boam and Cronenberg's substantial changes to his work, stating that they intensified the power of the narrative. Set in Castle Rock, Maine, shot on location in Ontario. Title page present, dated November 17, 1980, noted as FIRST DRAFT, with credits for screenwriter Jeffrey Boam and novelist Stephen King. 119 leaves, with last page of text numbered 118. Pages Near Fine, uniformly age toned, wrapper Very Good plus, with light soil and dampstaining, bound with three gold brads.