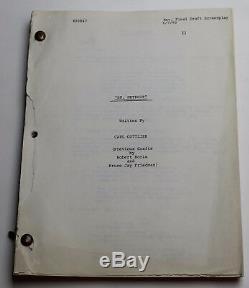 Script Dated: June 7, 1982. This is an original movie script from the 1983 movie titled, Doctor Detroit. This is likely an original office copy from the production company. This script has all white pages throughout inside and it is 131 pages long. It shows the appropriate signs of aging for being over 35 years old.

The cover page has a tear along the left edge. Please view all of the pictures above carefully. This script is in good overall condition.

Clifford Skridlow teaches at a small Chicago college run by his father. Conned into managing four prostitutes by their pimp, who skips town to escape the mob boss known as Mom, Clifford draws on his course in medieval literature in his quest to save the women from Mom. THE POSTER SHOWN IN THE LAST PICTURE ABOVE IS NOT INCLUDED, IT IS JUST BEING USED AS A VISUAL REFERENCE. Specializes in rare and collectible movie scripts.