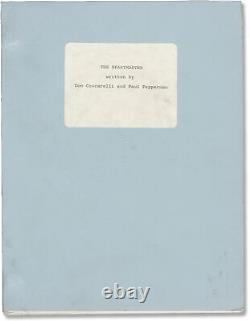 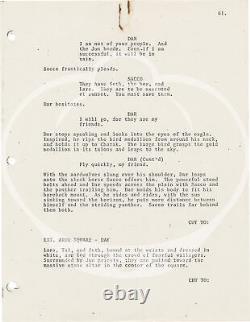 An internally duplicated copy made during production, with an old paper clip rust stain on one page which bleeds through five additional pages. Missing two pages, likely as used or issued. Loosely based on the 1959 novel "The Beast Master" by Andre Norton. Restored by Vinegar Syndrome in 2019. Set in the fictional kingdom of Aruk, shot on location in California and Nevada. Blue untitled wrappers with a label with title and credits for screenwriters Don Coscarelli and Paul Pepperman. Title page present, dated 1980, with credits for screenwriters Don Coscarelli and Paul Pepperman.

Subject: 1980s Cinema, Adventure, Exploitation, Fantasy, Film Scripts, Films with Literary Sources. Royal Books is located in the midtown area of Baltimore, Maryland. Since 1996, we have specialized in rare books and paper relating to twentieth century literature, genre fiction, the arts, and popular culture, with a particular emphasis on cinema.