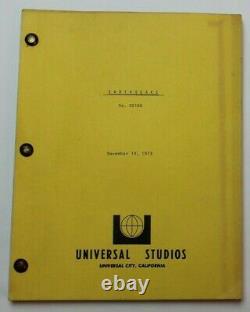 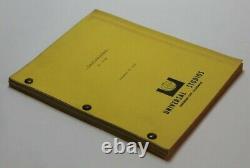 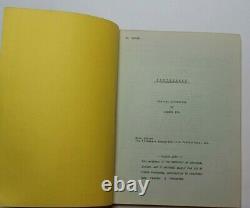 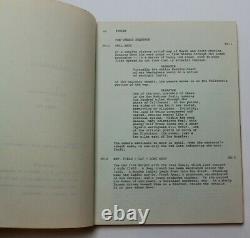 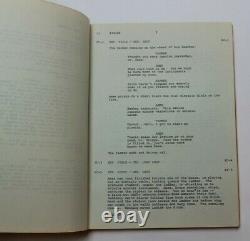 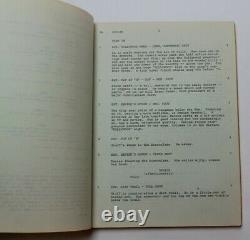 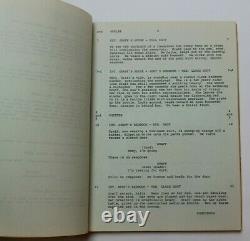 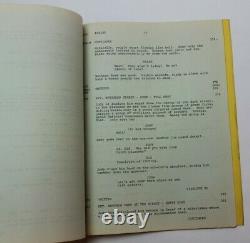 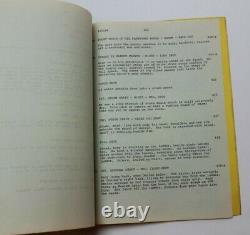 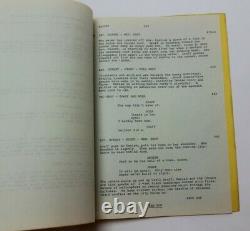 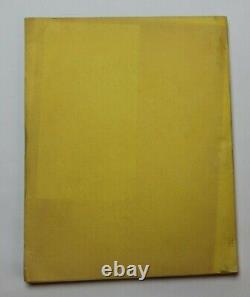 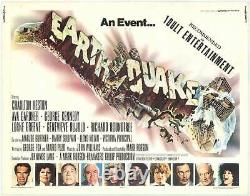 Script Dated: November 19, 1973. This is an original movie script used during the making of the 1974 disaster film titled, "Earthquake". This script has the original yellow, Universal Studios, production cover.

It has all eye-rest green pages throughout inside and it is 114 pages long. The front and back outer covers have discoloration from being in storage for many years. This is a cosmetic issue only and has no affect on reading.

It shows the appropriate signs of aging for being used during the early 1970's. Please view all of the pictures above carefully.

This script is in good overall condition. Construction Engineer Stuart Graff is estranged from his jealously possessive wife, Remy, and has an affair with Denise Marshall, the widow of a co-worker. Meanwhile, Remy tries to persuade her father, Sam Royce, who is Stuart's employer, to use his influence to stop Stuart from seeing Denise.

Rogue policeman Lew Slade is suspended from the L. For having punched an obtuse officer from another jurisdiction. Embittered, Slade contemplates quitting the police force. Jody, a perverted grocery store manager, lusts after Rosa Amici, sister of Sal, the assistant to Miles Quade, an aspiring daredevil motor cyclist. The lives of all these people are devastated when a major earthquake rips through Los Angeles and reduces the city to ruins. THE POSTER SHOWN IN THE LAST PICTURE ABOVE IS NOT INCLUDED, IT IS JUST BEING USED AS A VISUAL REFERENCE. Specializes in rare and collectible movie scripts. Our scripts are genuine, authentic and screen used. We also carry movie props from no genre in particular.

Every script that we own was hand-picked one at a time over the many years of which we have been collecting. A lot of people, new to collecting, are confused about the word Original. " In terms of movie scripts, the term "Original means that it was used by the production company in the early stages of production or that it was issued out to the cast and crew members during filming, and used at the time of production. Any scripts printed or used in any fashion after filming has completed are known as either a reproduction or a post-production script. These two types of scripts are much less valuable and desirable. All of our scripts are Original.. An original movie script has a lot of character in the item itself and every one of them is different in some way or another. There is usually only one script given to each crew member during production, however, sometimes they do get more than one. This makes original movie scripts very desirable because of how scarce they are. Any changes made to the screenplay during production are known as revisions and these revision pages are inserted into that one script that was issued out to them. For example, if we are talking about a low-budget film with a small cast and only a few crew members, there are actually only a small number of scripts in existence around the world for that film. This aspect of collecting makes it fun but also difficult because there may be a certain writer or director that you love to collect and there may only be a handful of movie scripts that still exist from that specific film that you are looking for. We have some of the rarest movie scripts in the world. Each film project has a different total number of scripts that are issued. The older a film is you also have to figure in the fact that a lot of the original movie scripts have been thrown out or destroyed over time. We do our best to provide the widest selection of original movie scripts in the world. Whatever actor, producer, director, writer or specific film department you are looking for, we probably have a movie script related to the person you are looking for in some form or fashion. I know that there are a lot of items to search through, but there is definitely something for you. Once you check off this little box it will allow you to search for a specific word that is contained in any of our listings' actual description. Here all of the original movie scripts will be categorized by decade, which will help you to narrow down what you are looking for by the year it was made. This item is in the category "Entertainment Memorabilia\Movie Memorabilia\Scripts\Originals\Unsigned". The seller is "themoviewizard" and is located in this country: US. This item can be shipped to United States, Canada, United Kingdom, Denmark, Romania, Slovakia, Bulgaria, Czech Republic, Finland, Hungary, Latvia, Lithuania, Malta, Estonia, Australia, Greece, Portugal, Cyprus, Slovenia, Japan, China, Sweden, Korea, South, Indonesia, Taiwan, South Africa, Thailand, Belgium, France, Hong Kong, Ireland, Netherlands, Poland, Spain, Italy, Germany, Austria, Bahamas, Israel, Mexico, New Zealand, Singapore, Switzerland, Norway, Saudi Arabia, United Arab Emirates, Qatar, Kuwait, Bahrain, Croatia, Republic of, Malaysia, Brazil, Chile, Colombia, Costa Rica, Panama, Trinidad and Tobago, Guatemala, Honduras, Jamaica, Barbados, Bangladesh, Bermuda, Brunei Darussalam, Bolivia, Ecuador, Egypt, French Guiana, Guernsey, Gibraltar, Guadeloupe, Iceland, Jersey, Jordan, Cambodia, Cayman Islands, Liechtenstein, Sri Lanka, Luxembourg, Monaco, Macau, Martinique, Maldives, Nicaragua, Oman, Peru, Pakistan, Paraguay, Reunion, Vietnam, Uruguay.