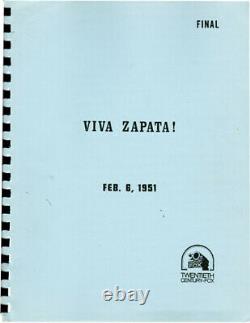 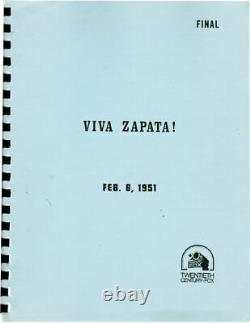 Description: Final script for the 1952 film. Based on the life of Mexican revolutionary leader Emiliano Zapata.

Xerographically reproduced Fox file copy, likely produced by the studio for its files in the late 1960s or a bit later. Kazan's romanticized, semi-fictional account of Zapata in his prime, this sweeping early Brando film glorifies the revolutionary's noble intentions and largely overlooks the rest. The culmination of screenwriter Steinbeck's long-standing fascination with Zapata, it was said that Steinbeck had begun work on such a screenplay as early as 1948. The subject was a touchy one, as the MPAA's Production Code Administration had been discouraging studios from working on such a film, and there were prolonged negotiations with the Mexican government about approval over the film's release that culminated in a second cut of the film especially for Mexican distribution. Kazan and Steinbeck, both ex-Communists, are said to have used this film to metaphorically express how they felt Communism in the Soviet Union had gone off the rails.