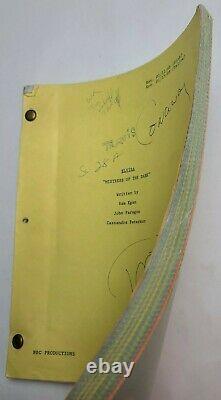 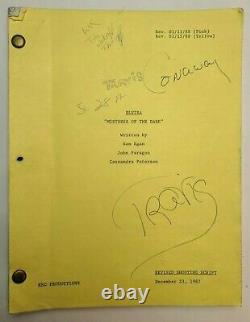 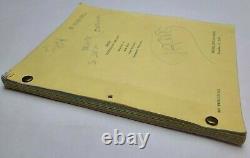 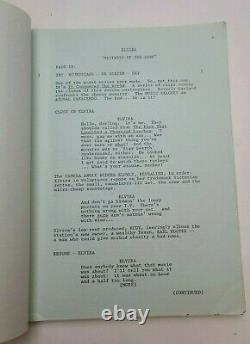 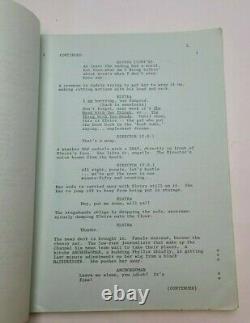 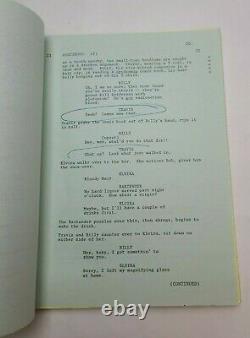 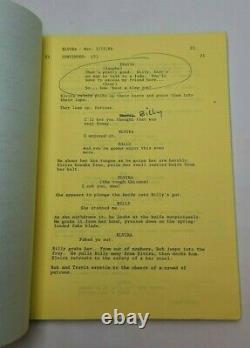 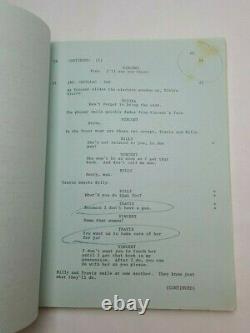 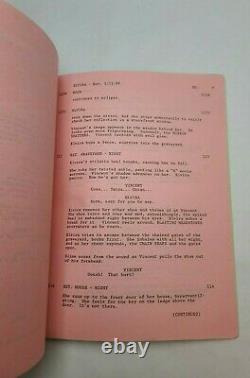 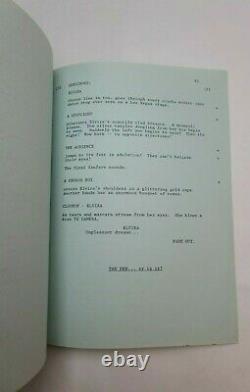 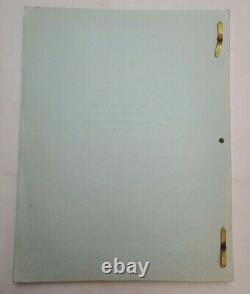 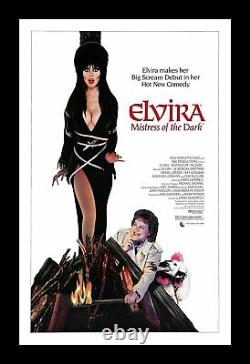 This is an Original Movie Script used during the making of the 1988 movie titled, "Elvira: Mistress of the Dark". The Title Page has some writing on it. This script was used by. Jeff Conaway, who played the role of "Travis".

Some of the pages inside have his lines circled, using a pen. It has multi-colored revision pages throughout it inside. It is the complete script and it is 97 pages long. Please view all of the pictures provided above.

It is in good overall condition. When a chauvinist millionaire buys the television network where the sexy Elvira is the horror hostess of a late show, she quits her job with the intention of producing her own show in Las Vegas.

Out of the blue, she receives a telegram informing that her great-aunt Morgana died and she has an inheritance to receive. Elvira drives to the uptight town of Fallwell, Massachusetts, where her convertible breaks down. While repairing her convertible, Elvira inherits an archaic mansion, a recipe book and a poodle. Meanwhile, the conservative council of Fallwell feels uncomfortable with Elvira's clothes and behavior and does not let her find a job. But cinema owner Bob Redding and the local teenagers help Elvira. When she decides to cook a dinner to impress Bob, she uses Morgana's recipe and finds that it is indeed a spell book that belonged to her mother Divana.

Further, Morgana has protected her from the warlock Vincent that wants the book to take over the world and destroy Elvira, who is a powerful witch. When Elvira refuses to sell the spell book to Vincent, he convinces the council that she is a witch that must be burned at the stake. How will Elvira stop the evil warlock Vincent? THE POSTER SHOWN IN THE LAST PICTURE ABOVE IS NOT INCLUDED, IT IS JUST BEING USED AS A VISUAL REFERENCE.

I know that there are a lot of items to search through, but there is definitely something for you. Once you check off this little box it will allow you to search for a specific word that is contained in any of our listings' actual description. Here all of the original movie scripts will be categorized by decade, which will help you to narrow down what you are looking for by the year it was made. The item "ELVIRA MISTRESS OF THE DARK / Sam Egan 1988 Screenplay, Cassandra Peterson film" is in sale since Saturday, October 9, 2021. This item is in the category "Entertainment Memorabilia\Movie Memorabilia\Scripts\Originals\Unsigned".