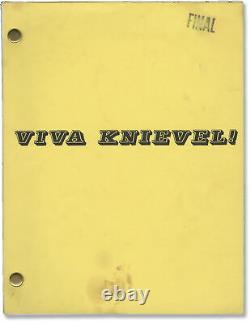 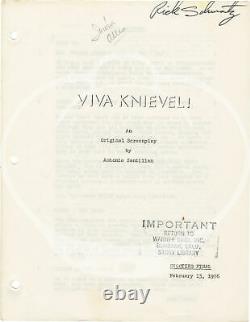 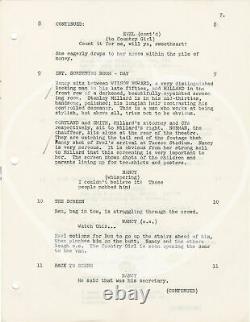 Description: Final Shooting script for the 1977 film. Uncredited makeup artist Rick Schwartz's copy, with his ownership name on the title page in holograph link, and with penciled check marks throughout relating to close-ups in the film.

Secretarial notation of supervising producer Irwin Allen's name on the title page. A stunt-heavy 1970s powerhouse, designed to capitalize on the enormous success of the 1971 film "Evel Knievel, " but with this entry featuring inimitable motorcycle daredevil Evel Knievel as himself. Also cast are Gene Kelly as his alcoholic mechanic, and Leslie Nielsen as a power-hungry Mexican drug lord. Knievel is offered a fortune to perform in Mexico, unaware that a drug cartel intends to kill him and use his tour bus to smuggle hundreds of kilos of cocaine. Set in California and Mexico, shot on location in Monterey Park, Burbank, and Long Beach, California.