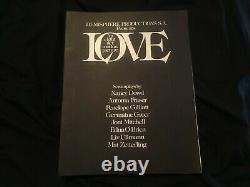 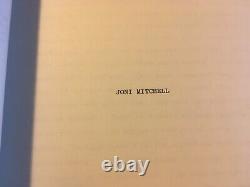 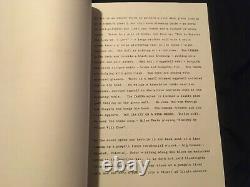 A MUST HAVE FOR THE ULTIMATE JONI MITCHELL FAN! Here we have a very rare early draft of the movie " LOVE "(1982) script (Los Angeles, CA Hemisphere Productions) in Very GOOD +/NEAR FINE condition. This Canadian film was first produced by Barry Levinson (then eventually Renee Perlmutter) who hired a team of female writers and a female director. This particular version was subtitled "An eight act motion picture"; and is rare because of the changes in writers and actors by the time that it was finally produced and released. Of the writers on the cover, three pf them were not credited for the film (Fraser, Gilliat, and Greer). The finished film includes six acts, with the additional writer not credited on the script being Gael Greene. THE BEST PART IS THAT THIS IS JONI MITCHELL'S ONLY FORAY INTO THE WORLD OF FILM; AND THAT THE FILM SHE HAS WRITTEN AND STARRED IN IS INCLUDED IN THIS EARLY DRAFT! Her contribution is a four page segment that eventually becomes " The Black Cat in the Black Mouse Socks " (which is available for your viewing pleasure on YouTube)! In black studio wrappers, the script was mechanically produced on light green stock, with a few annotations on the pages which are very crisp and clean overall, with LOVE written in black marker along the bottom edge. Printed by Scripts Limited, London, U. Pic shown is of Joni and film's collaborators in promotional tees. This item is in the category "Entertainment Memorabilia\Movie Memorabilia\Scripts\Originals\Unsigned". The seller is "danie_suga" and is located in this country: US.