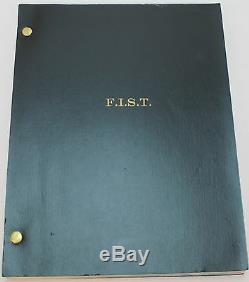 Johnny Kovak joins the Teamsters trade-union in a local chapter in the 1930s and works his way up in the organization. As he climbs higher and higher his methods become more ruthless and finally senator Madison starts a campaign to find the truth about the alleged connections with the Mob. POSTER IS NOT INCLUDED, IT IS JUST BEING USED AS A VISUAL REFERENCE. Specializes in rare and collectible movie scripts.

I know that there are a lot of items to search through, but there is definitely something for you. Once you check off this little box it will allow you to search for a specific word that is contained in any of our listings' actual description. Here all of the original movie scripts will be categorized by decade, which will help you to narrow down what you are looking for by the year it was made. 1977 Original Rare Movie Script Sylvester Stallone, Teamsters Drama" is in sale since Wednesday, March 27, 2019. This item is in the category "Entertainment Memorabilia\Movie Memorabilia\Scripts\Originals\Unsigned".