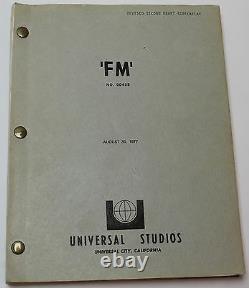 It has the original gray Universal Studios production cover and all white pages inside. Please view the pictures above carefully. This is the complete script and it's in very good condition. Q-SKY is the #1 radio station in Los Angeles mainly because of the music they play, and running the station the way they want to.

It has led them to a ratings success. The interesting radio personalities include: Jeff Dugan, rebellious head of the radio station; Mother, who is burned out from being a DJ; Eric Swan, a self centered romantic who wants more than just being a DJ; The Prince of Darkness, the hip night DJ; and Laura Coe, the easy-going type. The movie focuses on the battle between Jeff and his corporate bosses, who want more advertising and less music. POSTER IS NOT INCLUDED, IT IS JUST BEING USED AS A VISUAL REFERENCE. Specializes in rare and collectible movie scripts. Our scripts are genuine, authentic and screen used. We also carry movie props from no genre in particular. Furthermore, all of our items that are not props or scripts can be found in our Other Memorabilia category.