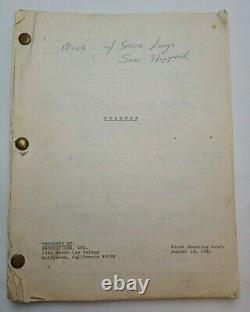 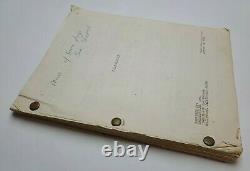 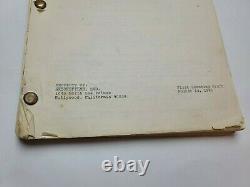 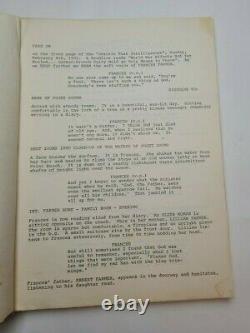 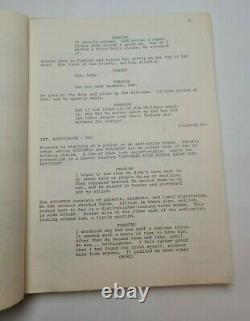 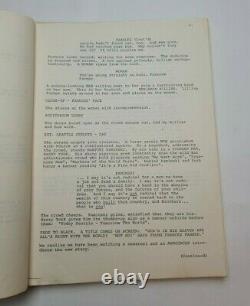 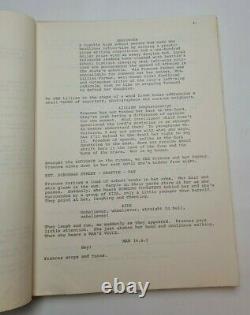 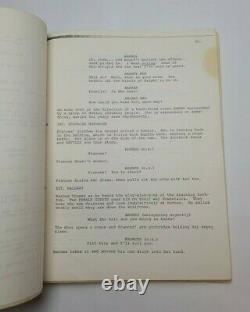 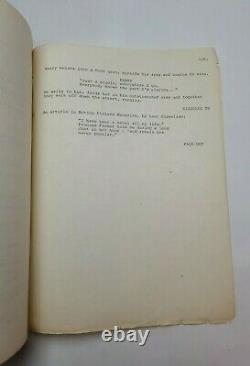 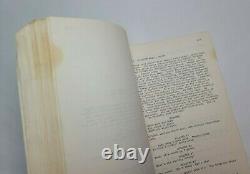 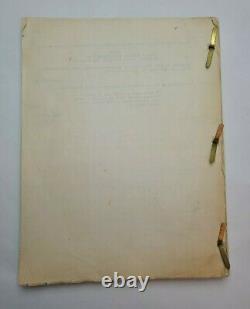 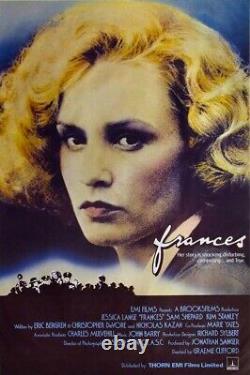 This is an original movie script used during the making of the 1982 film titled, " Frances". There is no writer credited on the Title Page. The Title Page credits Brooksfilms, Ltd.

It is likely an original Office Copy used by the production company because t his script does not have a production cover and it has all white pages throughout it inside. Some of the pages inside have black copy marks which is just how the production company printed this specific draft. It is complete and it is 126 pages long. The first and last page are tattered around the outer edges. Please view all of the pictures above carefully.

It shows the appropriate signs of aging for being used in the early 1980's. This script is in good overall condition. Frances Farmer, a precocious Seattle teenager, takes unpopular social and political positions, to the mixed reactions of her parents. Frances becomes an actress and has some strong success in New York, but her refusal to bend her convictions and her outspoken (but sometimes naive) political expressiveness cause her difficulties, especially after she accepts a Hollywood contract. Torn between new-found success and intense feelings that she does not deserve the riches and fame she gains from the phoniness of Hollywood, Frances butts heads with studio executives and with her own mother, who revels in Frances's fame but provides Frances no emotional support. When drunken fights and arrests derail her career, Frances is sent to a psychiatric hospital with the acquiescence of her mother. What follows is a nightmare of poor treatment and psychological trauma, augmented by the increasing determination of Frances's mother to control her daughter's life. THE POSTER SHOWN IN THE LAST PICTURE ABOVE IS NOT INCLUDED, IT IS JUST BEING USED AS A VISUAL REFERENCE.

Furthermore, all of our items that are not props or scripts can be found in our Other Memorabilia category. We do not sell reproductions or fakes. We have one of the largest collections of original movie screenplays in the world. We also carry scripts used in Television, Broadway, Radio and other forms of entertainment. Every script that we own was hand-picked one at a time over the many years of which we have been collecting. A lot of people, new to collecting, are confused about the word Original. " In terms of movie scripts, the term "Original means that it was used by the production company in the early stages of production or that it was issued out to the cast and crew members during filming, and used at the time of production. Any scripts printed or used in any fashion after filming has completed are known as either a reproduction or a post-production script. These two types of scripts are much less valuable and desirable. All of our scripts are Original.. An original movie script has a lot of character in the item itself and every one of them is different in some way or another. There is usually only one script given to each crew member during production, however, sometimes they do get more than one. This makes original movie scripts very desirable because of how scarce they are. Any changes made to the screenplay during production are known as revisions and these revision pages are inserted into that one script that was issued out to them. For example, if we are talking about a low-budget film with a small cast and only a few crew members, there are actually only a small number of scripts in existence around the world for that film. This aspect of collecting makes it fun but also difficult because there may be a certain writer or director that you love to collect and there may only be a handful of movie scripts that still exist from that specific film that you are looking for.