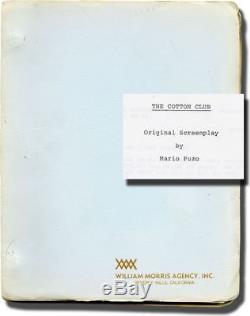 Description: Fourth Draft agency script for the 1982 film. Inspired by James Haskins' photo history book about the famed Harlem club. Lucia Bozzola: "Combining electric song and dance performances with drama (both on and off screen), Francis Ford Coppola's "The Cotton Club looks back to the 1920s-1930s peak of the legendary Harlem nightclub where only blacks performed and only whites could sit in the audience. Mixing historical figures with characters loosely based on actual people, Coppola and co-writers William Kennedy, and Mario Puzo (who Coppola worked with on "The Godfather" films) created a panorama of love, crime, and entertainment centered on the Club. Nominated for two Academy Awards.

This listing was created by Bibliopolis. The item "Francis Coppola COTTON CLUB Original screenplay for the 1984 film #129596" is in sale since Thursday, February 7, 2019. This item is in the category "Entertainment Memorabilia\Movie Memorabilia\Scripts\Originals\Unsigned".