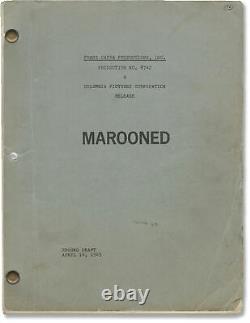 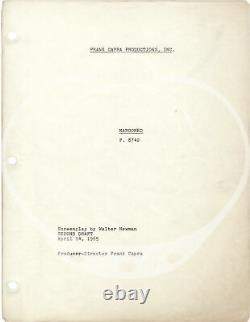 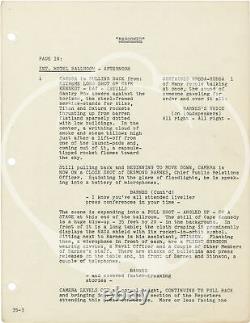 In 1965 Capra was in negotiations to get the financing for Newman's adaptation of Martin Caidin's 1964 novel. Unfortunately, the project was too ambitious, and the cost too great to get the production off the ground, even after Capra had heavy revisions made to the script. Walter Newman is the acclaimed, three time Academy Award nominated screenwriter of "Ace in the Hole" (1951), "Cat Ballou (1965), and "Bloodbrothers" (1978), as well as the uncredited screenwriter of "The Magnificent Seven" (1960) and "The Great Escape, " both of which he renounced credit on after disputes with the same director, John Sturges (who would go on to direct "Marooned in 1969, and perhaps not surprisingly, abandon Newman's screenplay, and hire screenwriter Mayo Simon). Newman is perhaps best known for his unproduced 1970 screenplay "Harrow Alley, " called by some "the greatest screenplay never made, " a 172 page macabre story of the Great Plague in mediaeval England, and is regularly taught in film writing classes, and has for years, as recently as 2018, been rumored to be in production. A film adaptation of Caidin's novel was made in 1969 by director John Sturges, with a screenplay by Mayo Simon, and starring Gregory Peck, Richard Crenna, David Janssen, and Gene Hackman.