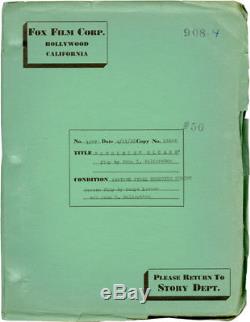 Balderston and Sonya Levien, based on Balderston's play. A pre-Code film adaptation of Balderston's stage fantasy in which a scientist (Leslie Howard) is fascinated by the 18th century and winds up being propelled there by a freak accident, where he then assumes the identity of one of his own ancestors. Green titled wrappers, rubber-stamped project No. 50, dated 4/11/33, and with credits in manual type for Balderston and Levien.

Distribution page present, with receipt intact. Title page is integral to the distribution page, and shows credits for the rest of the principal crew. 131 leaves, mimeograph, rectos only. Pages Near Fine, wrapper Very Good, with some flaking to the yapped edges, bound with three gold brads. In a custom quarter-leather clamshell box.

Subject: Film Scripts, Films Based on Plays, Pre-Code Film, Science Fiction. Royal Books is located in the midtown area of Baltimore, Maryland. Since 1996, we have specialized in rare books and paper relating to twentieth century literature, genre fiction, the arts, and popular culture, with a particular emphasis on cinema. All books noted as First Editions are also First Printings unless indicated otherwise. This listing was created by Bibliopolis.

The item "Frank Lloyd BERKELEY SQUARE Original screenplay for the 1933 film #116129" is in sale since Saturday, March 23, 2019. This item is in the category "Entertainment Memorabilia\Movie Memorabilia\Scripts\Originals\Unsigned". The seller is "vanburenantiques" and is located in Baltimore, Maryland. This item can be shipped worldwide.