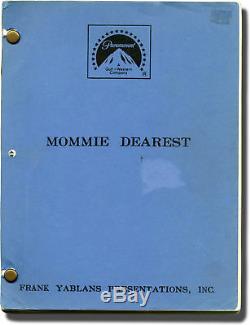 Joan, who was a perfectionist at heart, struggled with alcohol, relationships with men, and the pressures of show business, and Christina and her brother Christopher bore the brunt of it all. The careers of both Joan Crawford and Faye Dunaway were on the decline at the time of release, but Dunaway's campy over-the-top acting gave the film life, and helped resurrect her career, while perhaps shedding new, unsavory light on Crawford. Set in Los Angeles and shot on location there, with several scenes shot at Joan Crawford's mansion. Title page present, dated December 22, 1980, noted as Shooting Script, with credits for screenwriters Frank Yablans, Frank Perry, Abraham Polonsky. Red stamp on the title page reading, DUPLICATED BY PARAMOUNT PRINT SHOP. 140 leaves, with last page of text numbered 139. Photographically reproduced, with blue revision pages throughout, dated variously between 1/19/80 and 1/20/80. Pages Very Good plus, wrapper Very Good with a small bruise on the front wrapper, bound with two gold brads.

Subject: 1980s Cinema, Biography, Film Scripts, Films with Literary Sources, Hollywood. Royal Books is located in the midtown area of Baltimore, Maryland. Since 1996, we have specialized in rare books and paper relating to twentieth century literature, genre fiction, the arts, and popular culture, with a particular emphasis on cinema.

The item "Frank Perry MOMMIE DEAREST Original screenplay for the 1981 film 1980 #142605" is in sale since Monday, April 8, 2019. This item is in the category "Entertainment Memorabilia\Movie Memorabilia\Scripts\Originals\Unsigned".