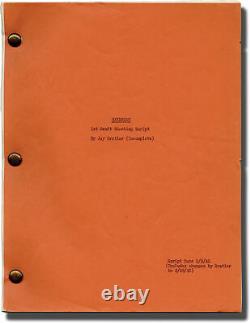 Intended for Ingrid Bergman, the project was called off after four weeks of work, supposedly because Bergman had decided to take on a different project. In truth, there was also a fair bit of conflict between Lang and Selznick, and the contract ultimately led to no produced work. A story set on "Gray Island, " just after WWII, involving a rich art collector, Stefan Korvath, and his blind wife, Nina, and the roaming painter, Chris Bartlett, who falls in love Nina. Salmon titled wrappers, noted as 1st Draft Shooting Script, and "incomplete, " on the front wrapper, dated 1/3/45 and 2/28/45, with a credit for screenwriter Dratler.