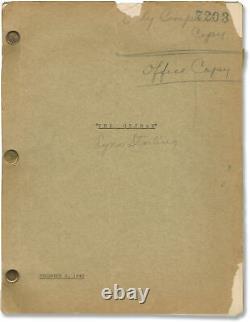 Description: Draft script for the 1944 Universal horror film. With holograph pencil annotations on the front wrapper and throughout, mostly noting deletions and page number changes. Included with the script is a bound set of revision pages attributed on the front wrapper and at the top of numerous leaves to dialogue director Gene Lewis, dated from 1/6/43 to 1/14/44.

Based on the play by Edward Locke, the film follows a physician who becomes obsessed with a young singer whose voice reminds him of his late wife's, whom he murdered because of a similar obsession. Originally intended to be a sequel to Universal Pictures' "Phantom of the Opera" (1943). Nominated for an Academy Award.

Carbon typescript on onionskin stock, rectos only, with yellow revision pages throughout, dated variously between 12/22/43 and 12/28/43. Pages Near Fine, wrapper Very Good plus, bound with two gold brads.

Weaver and Brunas, Universal Horrors. Subject: 1940s Cinema, Film Scripts, Films Based on Plays, Horror, Opera, Women Screenwriters. Royal Books is located in the midtown area of Baltimore, Maryland. Since 1996, we have specialized in rare books and paper relating to twentieth century literature, genre fiction, the arts, and popular culture, with a particular emphasis on cinema. All books noted as First Editions are also First Printings unless indicated otherwise.