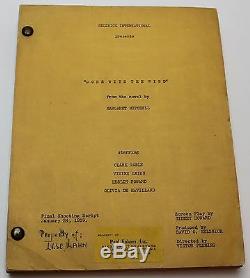 This is an Original Movie Shooting Script from the 1939 Classic, Gone with the Wind. This script has the original Selznick Production Cover. On the cover there is an agency sticker from Paul Kohner, who was a big Hollywood Producer known from such films as the 1931 version of Dracula. This script was owned by him and stored in his personal Library which is why it is in such great condition. Before Paul Kohner owned it, this script belonged to, Ilse Lahn, who was another famous Hollywood Producer in the 1950's.

This script is Complete and is 256 pages long. Please view the pictures above carefully.

The script is in very good overall condition with signs of age. Scarlett is a woman who can deal with a nation at war, Atlanta burning, the Union Army carrying off everything from her beloved Tara, the carpetbaggers who arrive after the war. But Ashley, the man she has wanted for so long, is going to marry his placid cousin, Melanie.

Mammy warns Scarlett to behave herself at the party at Twelve Oaks. There is a new man there that day, the day the Civil War begins. Scarlett does not know he is in the room when she pleads with Ashley to choose her instead of Melanie. THE POSTER SHOWN IN THE LAST PICTURE ABOVE IS NOT INCLUDED, IT IS JUST BEING USED AS A VISUAL REFERENCE.

I know that there are a lot of items to search through, but there is definitely something for you. Once you check off this little box it will allow you to search for a specific word that is contained in any of our listings' actual description. Here all of the original movie scripts will be categorized by decade, which will help you to narrow down what you are looking for by the year it was made. The item "GONE WITH THE WIND / Sidney Howard 1939 Movie Script of Margaret Mitchell novel" is in sale since Saturday, May 30, 2020.