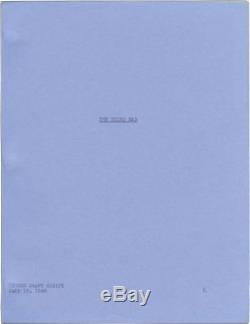 The Third Man (Original Screenplay for the 1948 film). Author: Greene, Graham (screenwriter, story); Carol Reed (director); Orson Welles, Joseph Cotten (starring) Title: The Third Man (Original Screenplay for the 1948 film) Publication: Los Angeles: David O. Description: First Draft script for the seminal 1949 film noir, "The Third Man, " directed by Carol Reed, based on an original screenplay by Graham Greene. A copy from the Selznick archive, which resided for decades at the University of Texas, originally issued over a year prior to the film's release. "The Third Man" was a co-production between London Film Productions in England and Selznick Studios in Hollywood, this being a script that was made for reference at Selznick Studios.

Blue titled wrappers, rubber-stamped No. 23 on the front wrapper, and dated July 19, 1948. 118 pages, mimeograph, bound with three silver brads. No author credit is present. Original screenplay by Graham Greene based upon his own treatment, and the only original screenplay ever to have been written by the noted author.

Starring Joseph Cotten as Holly Martins, Anna Schmidt as Valli and Orson Welles as Harry Lime. Produced and directed by Carol Reed, who narrated the UK version, and who worked with Greene on two other films, "The Fallen Idol" and Our Man in Havana. Released on September 3, 1949. Subject: Film Noir, Film Scripts.

All books noted as First Editions are also First Printings unless indicated otherwise. This listing was created by Bibliopolis. The item "Graham Greene THIRD MAN Original Screenplay for the 1948 film #128640" is in sale since Tuesday, January 8, 2019. This item is in the category "Entertainment Memorabilia\Movie Memorabilia\Scripts\Originals\Unsigned".