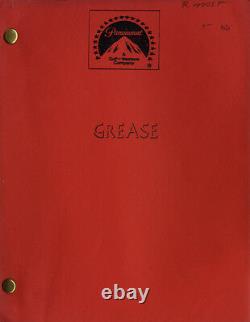 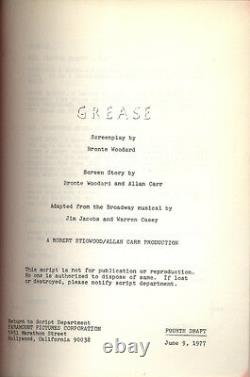 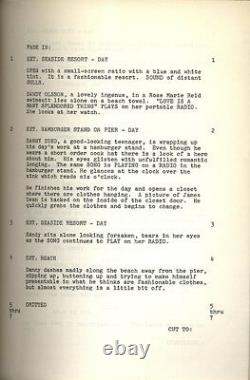 Red printed studio wrappers, brad bound, mimeograph, 110 pp. Vintage original script for one of the classic musical films of the 1970s, directed by Randall Kleiser and starring John Travolta and Olivia Newton-John. Filmed in various Southern California locations, it takes place in an unidentified area near a beach in the late 1950s.

All of the iconic Los Angeles locations used cause the viewer to assume this is set in California, although that is never clearly stated in the dialogue. This film was a major triumph for gay impresario Allan Carr, who served both as writer and producer on this film. Carr was a major figure in entertainment history. He achieved great success as a talent agent and as a stage and film producer, with the Broadway production of LA CAGE AUX FOLLES and with the film GREASE. He also became a subject of ridicule for his production of the extremely campy 1989 Oscar awards ceremony.

It must come back in the same condition as it was sent. AUTHENTICATION: My name is Walter Reuben. I have been collecting movie posters since 1978. I have been a full-time dealer since 1982. Everything which I sell is fully researched and entirely guaranteed to be completely authentic and as described.

A lifetime of experience goes behind every description of every piece which I offer. ABOUT ME: For further information, go to the ABOUT ME. The item "GREASE (Jun 9, 1977) Fourth draft film script by Bronte Woodard" is in sale since Tuesday, December 5, 2017. This item is in the category "Entertainment Memorabilia\Movie Memorabilia\Scripts\Originals\Unsigned". The seller is "walterfilmusa" and is located in Los Angeles, California. This item can be shipped worldwide.