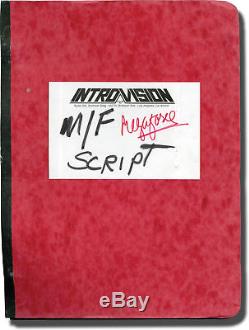 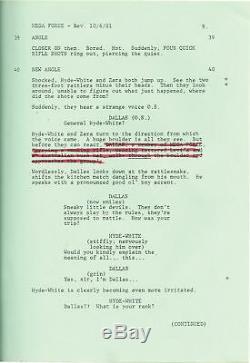 Megaforce (Original screenplay for the 1982 film). Author: Needham, Hal (director); Hal Needham, Bob Kachler, James Whittaker, Albert S. Ruddy, Andre Morgan (screenwriters); Barry Bostwick, Michael Beck, Persis Khambatta (starring) Title: Megaforce (Original screenplay for the 1982 film) Publication: Hong Kong: Golden Harvest Company, 1981. Description: Revised Draft script for the 1982 film. With the label of special effects outfit Introvision on the front wrapper, and holograph notations throughout noting places where the process is to be used in the film, including the climatic scene where Barry Bostwick transforms his motorcycle into a rocket and flies it onto the back of an airborne transport plane.

Making its debut two years earlier in "Outlander, " Introvision was a front projection process that allowed composites of live action and plate photography to be viewed in real time in camera, and allowed actors to appear to move three dimensionally within the image, and was used most famously in "The Fugitive, " when Harrison Ford leaps out of the way (of superimposed footage) of a crashing train. An elite, international peacekeeping force comes to the aid of small country that has been invaded by its aggressive neighbor, using a variety of high tech vehicles.

Set in the fictional countries of the Republic of Sardun and Gamibia, shot in and around Las Vegas. Title page present, dated September 29, 1981, noted as Revised Draft, with credits for screenwriter James Whittaker and story by Robert Kachler. 105 leaves, with last page of text numbered 95. Photographically reproduced, with blue revision pages throughout, dated variously between 10/6/81 and 10/7/81. Pages Near Fine, wrapper Very Good plus, bound with a silver prong binding.

Since 1996, we have specialized in rare books and paper relating to twentieth century literature, genre fiction, the arts, and popular culture, with a particular emphasis on cinema. All books noted as First Editions are also First Printings unless indicated otherwise. This listing was created by Bibliopolis. The item "Hal Needham MEGAFORCE Original screenplay for the 1982 film 1981 #143031" is in sale since Saturday, March 9, 2019. This item is in the category "Entertainment Memorabilia\Movie Memorabilia\Scripts\Originals\Unsigned".