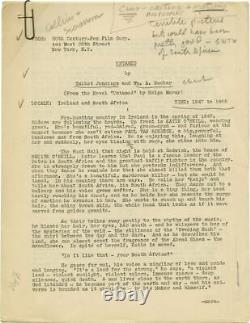 Description: Treatment script for the 1955 film. Brief annotations in holograph pencil throughout, and two names, Collins and Swann (presumed, association unknown), on the first page. Noted in pencil on the last leaf of text as 13 page treatment / 28 story developments / The entire story related here / story of taming of a man and a country. Undated, but circa late 1954.

Based on the 1950 novel by Helga Moray, about a stunning redhead (Susan Hayward) and her husband (John Justin) who emigrate from Ireland, in the wake of the potato famine, to South Africa, where she meets the love of her life (Tyrone Power). Set in South Africa and shot there on location. Loose leaves, 8.5 x 11 inches, Multilith duplication, stapled and also bound with a paperclip.