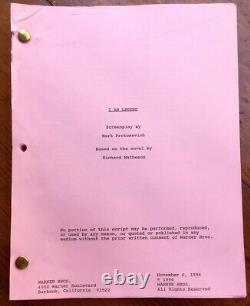 Original movie script by Mark Protosevich, November 6, 1996, 147 pink pages bound with two brass brads, in very good condition. This science fiction favorite began as a Warner Bros. Project in 1994 but had to overcome financial and technical hurdles for over a decade before finally being made into a movie and released in 2007. The movie was directed by Francis Lawrence and starred Will Smith, Alice Braga, and Charlie Tahan.

The script comes from the estate sale of movie executive John Calley that took place a few years following his death in 2011. On the back spine, someone has written the title of the film so it might be read when placed in a bookshelf. Vendio Images: More than just a pretty image.

This item is in the category "Entertainment Memorabilia\Movie Memorabilia\Scripts\Originals\Unsigned". The seller is "member48920" and is located in Woodland Hills, California. This item can be shipped worldwide.