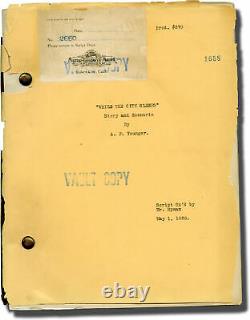 Lon Chaney is an undercover police detective who attempts to catch a thief notorious for slipping out of criminal charges by killing any witnesses set to testify against him, though Chaney can't help but simultaneously get wrapped up with an attractive flapper along the way. Chaney hand-picked co-star Anita Page as his leading lady after seeing her performance in the 1928 film Our Dancing Daughters. A partially lost film, with two reels and the soundtrack for the picture have now missing. Tan titled wrappers, rubber-stamped copy No.

Subject: 1920s Cinema, Actors, Directors, Film Scripts, Mystery and Crime, Silent Film. Royal Books is located in the midtown area of Baltimore, Maryland. Since 1996, we have specialized in rare books and paper relating to twentieth century literature, genre fiction, the arts, and popular culture, with a particular emphasis on cinema. All books noted as First Editions are also First Printings unless indicated otherwise. This listing was created by Bibliopolis.

This item can be shipped to North, South, or Latin America, all countries in Europe, Japan.