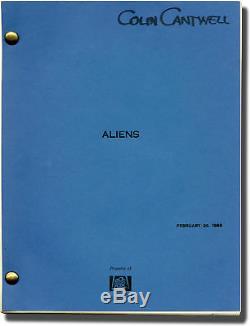 Aliens (Original screenplay for the 1986 film). Author: Cameron, James (director, screenwriter); David Giler, Walter Hill (screenwriters); Sigourney Weaver, Bill Paxton, Lance Heriksen (starring) Title: Aliens (Original screenplay for the 1986 film) Publication: Los Angeles: Twentieth Century-Fox, 1986. Description: First Draft script for the 1986 film. An early draft, attributed solely to James Cameron as screenwriter (Walter Hill would later provide revisions). Copy belonging to special effects designer Colin Cantwell, who worked prior to this film on "2001: A Space Odyssey" (1968) and "Star Wars" (1975), with his name in black marker on the front wrapper and the title page. "Aliens" had a long and winding production road, consisting mostly of James Cameron delivering the draft on offer here, holding out until he got exactly what he wanted, which included a 70mm distribution, Sigourney Weaver in the lead role, and the record-breaking budget for which he has since become famous. Nominated for seven Academy Awards, including Best Actress for Weaver. A rare example of a sequel where in the sequel is not only as well received as the original film, but stands on its own as a separate work.

A turning point in director James Cameron's career, his first big budget effort after the wildly successful "Terminator" in 1984, managing to prove rather well that he knew what to do with a big budget. Blue titled wrappers, dated February 26, 1985.

Title page present, dated February 26, 1985, noted as First Draft, with a sole writing credit for James Cameron. 122 leaves, with last page of text numbered 121. Pages and wrapper Near Fine, bound with two gold brads. Subject: 1980s Cinema, Directors, Dystopian, Film Scripts, Horror, Science Fiction. Royal Books is located in the midtown area of Baltimore, Maryland. Since 1996, we have specialized in rare books and paper relating to twentieth century literature, genre fiction, the arts, and popular culture, with a particular emphasis on cinema. All books noted as First Editions are also First Printings unless indicated otherwise. This listing was created by Bibliopolis. The item "James Cameron ALIENS Original screenplay for the 1986 film #138744" is in sale since Saturday, March 23, 2019.