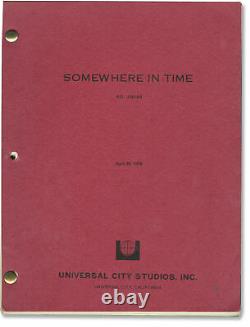 Somewhere in Time (Original screenplay for the 1980 film). Author: Szwarc, Jeannot (director); Richard Matheson (screenwriter, novel); John Barry (composer); Christopher Reeve, Jane Seymour (starring) Title: Somewhere in Time (Original screenplay for the 1980 film) Publication: Universal City, CA: Universal Pictures, 1979. Description: Final Draft script for the 1980 film. Copy belonging to crew member Susan Bender (the film's assistant location auditor, per IMDB), with her name in holograph ink at the top right corner of the title page. A blend of science fiction and romance that has over time become a beloved classic. Christopher Reeve portrays a melancholy playwright who becomes fascinated with the woman in a portrait hanging in a hotel, and uses self-hypnosis to transport himself to her time. Nominated for an Academy Award. Red titled wrappers, noted as production No. 00590, dated April 24, 1979. Title page present, noted as Final Draft, with credit for screenwriter Matheson.

This listing was created by Bibliopolis. The item "Jeannot Szwarc SOMEWHERE IN TIME Original screenplay for the 1980 film #128655" is in sale since Wednesday, January 20, 2021. This item is in the category "Entertainment Memorabilia\Movie Memorabilia\Scripts\Originals\Unsigned".