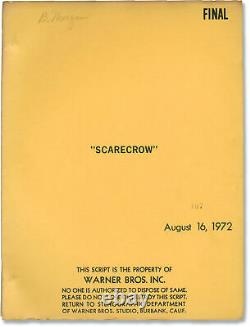 Description: Final Draft script for the 1973 film, dated August 16, 1972. With name of uncredited cast or crew member B. Morgan in holograph pencil on the front wrapper. Two drifters set out on a journey east from California towards Pittsburgh, hoping to start a business together when they arrive. A key film from the New Hollywood era and one of the best proletarian-minded works of the 1970s, winner of the Palme d'Or.

Set on a journey across the United States, shot on location in Denver and Canon City, Colorado, Detroit and Hamtramck, Michigan, and Reno, Nevada. Yellow titled wrappers, noted as FINAL on the front wrapper, rubber-stamped copy No.